Live Sic Bo online is a virtual version of a Chinese dice game, which was licensed for use in online casinos.

Its Live version has gained incredible popularity due to the fact that the game is played in the presence of a live dealer and players have the opportunity to hear his or her voice.

Advantages of the live version

The dealer actively participates in the game process and throws the dices. However, all calculations and payments are performed by a special program. The online game allows participation of several guests at a time. The Chat window allows the player to communicate with other players and the dealer. You type messages in the Chat window and get the answers in verbal form. Thus, you can hear the voice of a real casino employee.

The game is usually broadcast from a studio, specially furnished in the style of a gambling hall. You can hear quiet pleasant music and see a luxurious interior decorated with elegant furniture. The game uses professional webcams with a wide range of functions. The HD mode allows you to see a three-dimensional view of all objects, while color filters create very bright images.

A camera, where Zoom function is activated, brings objects very close. You can perfectly see the close-ups of dice with a different number of dots on each side. Thus, you can track the accuracy of the game results. 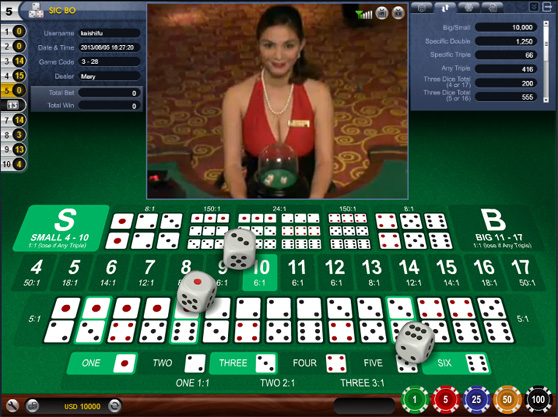 In some virtual gambling institutions in the United Kingdom, the Live Sic Bo Online games are broadcast from the hall of a real casino. When the game is streamed from a special studio, there are only employees of the casino in the hall. In this case, players can communicate only remotely. If the game is broadcast from a real gambling establishment, other players may also be present there. In some cases, the game is televised via TV cameras. This is convenient for those people who don’t like to use a computer.

A round of Sic Bo consists of throwing three cubes, the so-called dice. Six sides of each die are marked with round dots in the number from 1 to 6.

Before the croupier rolls the dice, players place their bets on a specially marked screen. Then they try to guess the numbers that appear on the top side of each die.

Different players can bet on the same result without disturbing each other.

Online casinos can set betting limits just like in other board games described at live-croupier.org. Bets in live versions of the game are usually higher than in the automatic ones.

The dealer places dices in a plastic cylinder and shakes them properly without touching them directly with hands. Then the dices are thrown from the cylinder to the table and roll in random directions. In some casinos, this cylinder looks like an hourglass. In the process of shaking, the cubes fall into one or the other part of it.

There are seven kinds of bets in this game. The game board has an original marking, which differs from the layout of the usual roulette table. Therefore, the game can seem very complicated at first glance. In fact, the reading of the rules will take only a few minutes. Even if you’re seeing this game for the first time.

Before the start of the round, the player has the right to make several bets. Any combination of bets is acceptable, but it should not go beyond the limitations of this table and the player’s own bankroll. 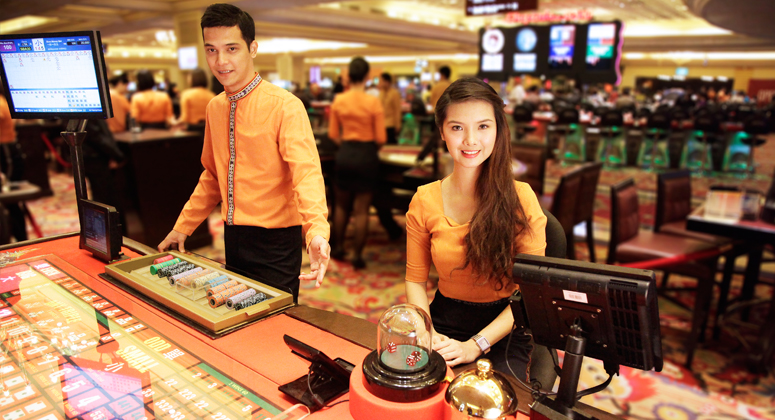 Some players prefer to make several bets at a time: these can be bets on a double of fives, a triple of fives, on any triple, and on several different sums of three numbers.

There are some players in the United Kingdom, who use a certain strategy. They usually bet only 1 chip on one number. If their bet loses, they double it, and if it wins, they move to the next number. Thus, they go from 1 to 6. This strategy allows you to steadily and slowly replenish the account to a certain limit. That’s why there are betting restrictions on gambling tables. Each player can choose his own strategy.

Live Sic Bo Online uses hand-made dice of ideal shape, with a certain numbering. The sum of dots on the opposite faces is always 7. The dealer can be perfectly seen on the screen. Control buttons allow switching video to different modes. Information tabs enable you to monitor the statistics of the current game. Chat allows you to interact with other guests. At the same time, other players do not disturb you, when making bets and communicating with the dealer. A player has the opportunity to hear the music and the voice of the dealer, but also he can turn off all sounds and speed up the game process.

Thanks to its visual appeal and high prizes, Sic Bo game with a live dealer has become incredibly popular.