Caribbean Stud Poker online is the most simplest from kind of poker in game against casino.

The Caribbean Stud Poker online is played in all real and virtual gambling clubs and halls in the United Kingdom. You have the opportunity to learn the rules of the game using the live-croupier.org website. In addition, you can try your hand at the game and understand the intricacies of the card battle in the free demo mode.

The rules are the same in all UK virtual casinos, but there may be some difference in the payment tables, which affects the profitability of the game. 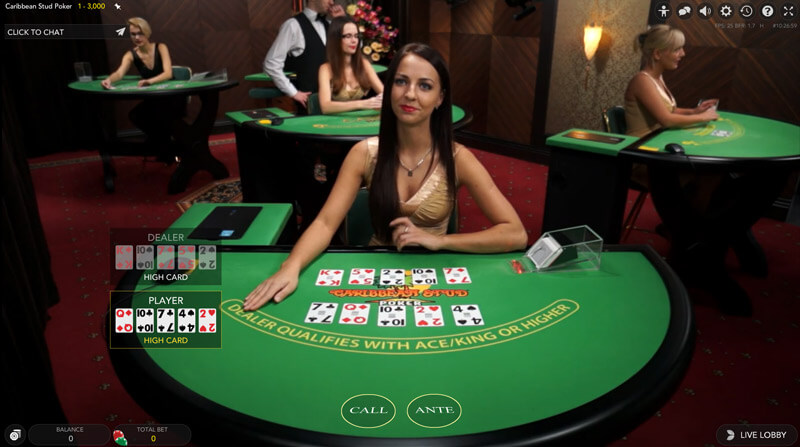 For example, the most expensive and strong group of cards, Royal Flush, is paid at a ratio of 100:1 in most offline gambling establishments. At the same time, this combination can have a ratio of 200:1, or even 999:1 in some virtual clubs.

There are also differences in prize payments for Full House, Quads, Flush, and other winning combinations.

In other words, some online casinos have a focus on the rare, but very profitable combinations, while others attract players with smaller, but more frequent prizes.

In the NetEnt casino, for example, the Royal Flush is paid at a ratio of 200:1, Straight Flash ‑ 50:1, Quads ‑ 20:1. This gambling institution has an emphasis on more frequent payments. And, as a rule, many players like it.

Learn the rules of the game in demo mode, and save your money.

Rules of the game

Players who have a great experience of gambling argue that it is difficult to imagine something simpler than the Caribbean Stud. It could be slots ‑ but not all of them, anyway.

Before starting the distribution of cards, the player places an ANTE bet and, if desired, also a bet on the progressive jackpot.

The player receives 5 cards in the open, while the dealer gets the same number of cards, but only one of them is opened.

At this point, the player evaluates his cards and makes a decision: to double the Ante (to call) or to discard (to fold).

In case of a failure, the player loses all his bets.

The minimum allowed hand for the dealer is Ace and King. If the dealer has a lower combination, he’ll automatically lose.

In some online gambling establishments in the United Kingdom, the yield of the Caribbean Stud percent is bigger than Baccarat. There isn’t any special strategy, and the player shall make only one decision. Following certain rules, you can maximize the percentage of return from all your bets:

These two rules will help you to increase most of your money. 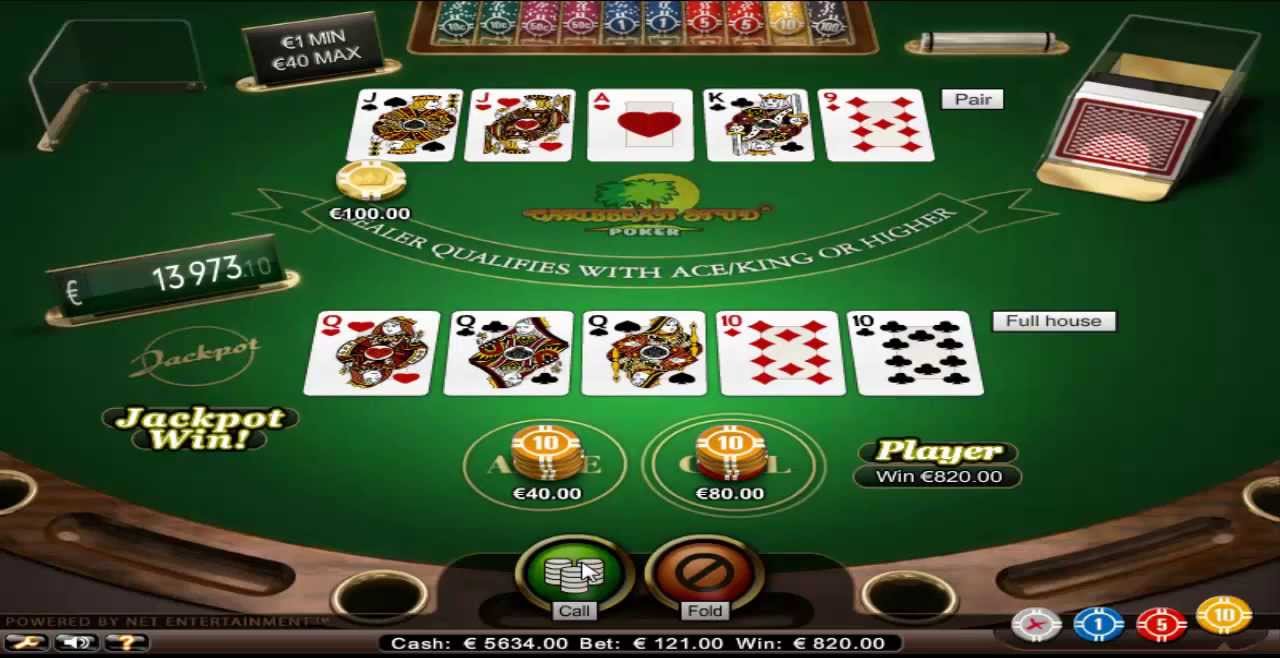 It all depends on your and the dealer’s open cards:

In these cases, the player can continue playing, which should bring him more benefit than with the first two rules.

Playing the Caribbean Stud Poker online, you can bet on the Ante and Jackpot. In the event that you bet only on ANTE and got a combination of Royal Flush, you will get a sum that is equal to the Jackpot. Those players who spend whole days in online casinos, believe that the extra bet allows gambling institutions to take some of the player’s money to the casino’s bank.

Since Jackpot is quite a rare event, you just present your money to the casino. However, those who play with a high bankroll of several hundred thousand dollars, can fully expect to receive the biggest prize of the game. They have a sufficiently large strength margin for this. 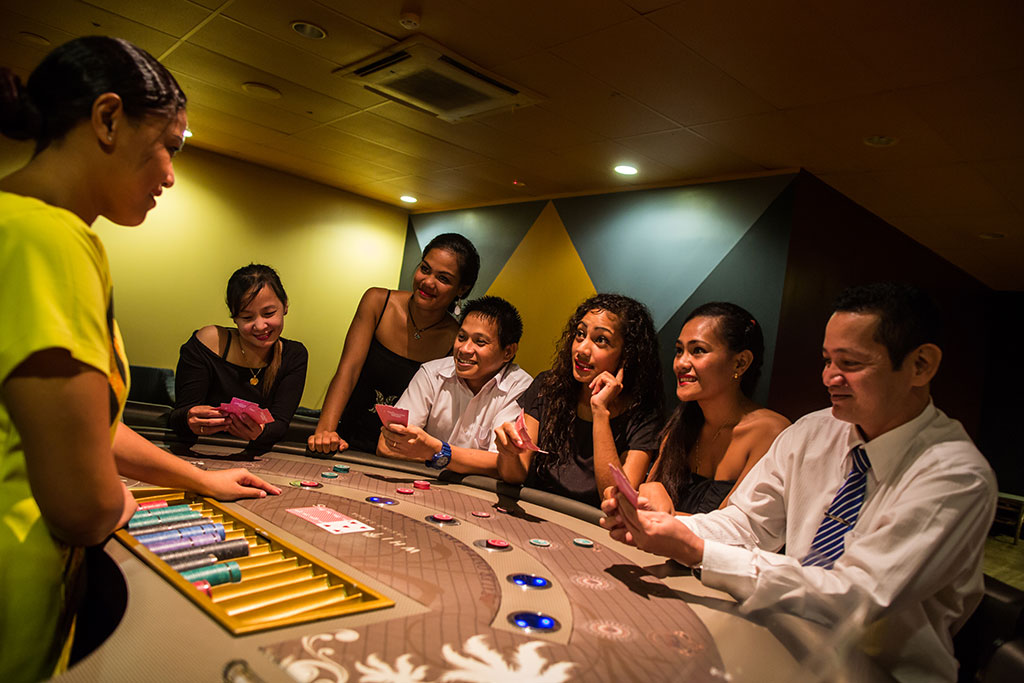 Starting the game, click the left mouse button to select the chip you want to bet. Each table has its own limitations. If your bet exceeds these values, the submenu window will pop up on the screen and remind you of allowable limits. In many online casinos in the United Kingdom, there are different betting limits on different pages. You can change the page, if you want to switch to a more profitable or more economical game.

With the next click, you choose the point, where you want to place a bet. First of all, these are Ante and Jackpot. If you have changed your mind, before the start of the dealing, you can resize the Ante or cancel the Jackpot bet by clicking on it again.

Another click on the DEAL button and the battle begins. If you want to make the same bet in the next round, you can click on Repeat. You can also double the bet or replace it with another one. In the latter case, use the Clear button.

The Caribbean Stud in the UK online casino is played with a deck of 52 cards. The first hand consists of 5 cards. The player receives the cards in the open. The dealer has four cards closed, and only one is open. The player can’t take any additional cards.

If you have compared your cards to a single open card of the dealer and decided to play further, you’ll have to make another Bet equal to two Ante bets. If you don’t wont to play, click the Fold button, after which you’ll lose your Ante bet.

After the player has made a bet, the dealer turns over his four closed cards and compares them to the player’s cards. 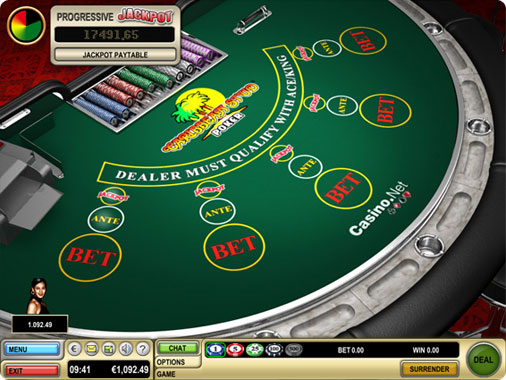 To be able to deal with the players, the dealer must have a group of cards no lower than the ACE-KING or one of the poker winning combinations. If the dealer’s hand is weaker than those of players, all players receive a prize for ANTE in the ratio 1:1, and gets back their bets.

If the dealer has a relatively strong hand, then the winnings will be given to those, who have stronger cards. In this case, the player gets the prize for Ante at the ratio of 1:1. The prize is paid according to the table of winning combinations. In the event that the hands of the dealer and the player are equally strong, the player gets back both Ante and second Bet.

For beginners, it is useful to practice in free demo mode. This will help you to learn all the nuances of the game and to save your pounds. When you choose one of the UK online casinos, register an account, and make a deposit, you will be able to get a welcome bonus and to participate in numerous promotions and tournaments. In addition, you will be allowed to enjoy the privileges of permanent guests, to receive gifts, and to play the internal lottery. Any additional information can be found at live-croupier.org.