Aces and Eights slot machine is one of the modern slots of the new generation. 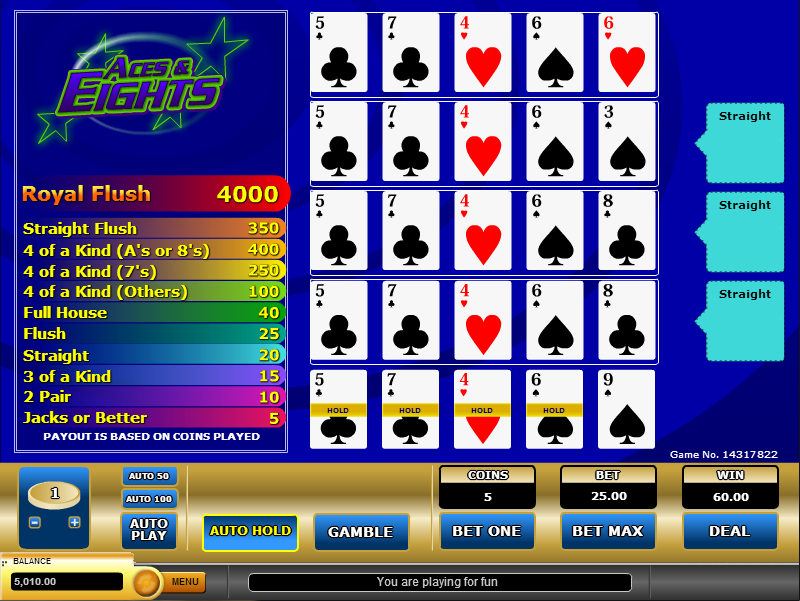 In the past, the video poker had relatively the same rules everywhere. However, after its transition to the virtual reality, there appeared many interpretations, additions, and options of this popular game. Aces and Eights is a vivid example of such changes. It is quite natural that all manufacturers of software for gambling hurried to replenish their game assortment with this fascinating version of video poker.

The slot has very simple and at the same time high-quality graphic design. This gives players the ability to fully focus on the game without being distracted by unnecessary interface details. The cards of light colors with detailed symbols look very contrasting against a bright blue background. In such conditions, even a long-term game does not tire your eyes and you’ll get maximum pleasure.

The game is played with a standard deck of 52 cards, which doesn’t have a place for the Joker. Before the next distribution, the deck is carefully shuffled. All users of the Aces and Eights slot machine have the right to determine the number of active lines for each round. The maximum number of such lines is 25. If the player has selected several lines, the starting combination will be scattered across all active lines. For the Aces and Eights gaming machine, as for all types of gambling, a simple rule is valid: The greater the number of active lines, the more frequent are prize combinations.

Winning combinations in the slot are familiar to all fans of gambling. These include pairs, a royal flush, and others. The payout ratios that are presented in the Aces and Eights slot are significantly different from the other gaming machines.

Among the functions of the slot machine, there is a risk-game option. This round becomes available after each successful round. The player has the opportunity to choose whether to grab the chance and double the win or to refuse and just take the money. If the player still wants to try his luck in a risk game, there will appear five cards on the screen, one of which is open. From the four unknown cards, the player must choose the one that will be higher than the opened card.

If the task is solved successfully, the amount of prize will be doubled. Of course, the risk is quite large, but the winnings can be increased many times in a best-case scenario. That’s the place, where emotions and excitement are really strong. Prize combinations in the slot machine are paid with the following coefficients:

You need to specify the bet size before you start the game. Then you only need to press the “Deal” key and the game will begin. The player will receive a set 5 cards and need to choose among them the ones that will help him win. This choice implies a good understanding of all the possible winning combinations from the payout table.

All major winning combinations consist of Jacks, Queens, Kings, and Aces. The winning combination, which is formed after the second distribution of cards, will be highlighted in the table. The Aces and Eights slot machine is designed in a rather laconic style. Nevertheless, it’s a very dynamic game with significant prize coefficients.

The Aces and Eights slot machine is simple and interesting, profitable and captivating at the same time. Playing in it, you can spend every minute with great interest. Positive emotions and great mood are an almost guaranteed result of the game, and a significant cash prize will be the pinnacle of success.