Adventure Palace slot is a journey in the deep of the jungles, where a really wealthy ancient palace is situated. 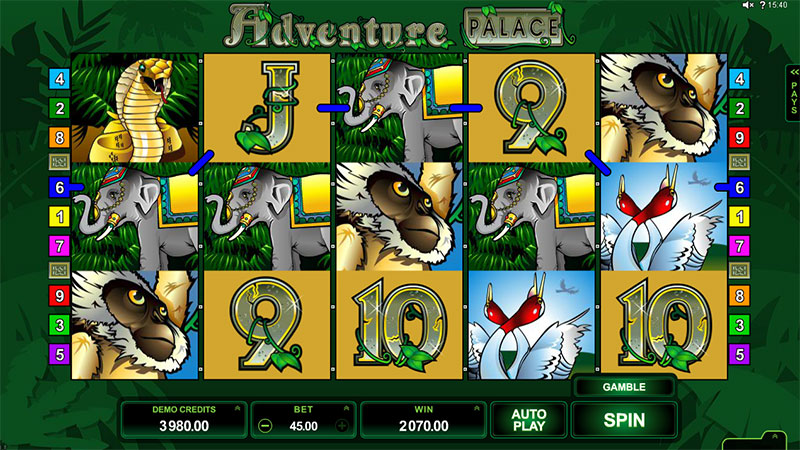 On the way to an ancient Indian palace, hidden among dense jungles, the player will meet many different animals. The main prize ‑ an ancient palace filled with fabulous wealth ‑ awaits the most persistent users.

The Adventure Palace slot machine is designed in bright, rich colors. The saturated hues of green create an atmosphere of the jungle. The slot’s soundtrack fully corresponds to what is happening on the screen. The slot has a structure that is very familiar to experienced gamblers, it consists of 5 reels and 9 pay lines. Players can place bets ranging from 1 to 5 coins per line. The value of the coins is set at the very beginning of the game. After placing a bet, the pay line becomes active. A player can make a bet on all 9 lines at the same time, automatically increasing his chances of winning.

To enjoy the journey through the mysterious India and to get a chance to break the jackpot, you need to launch the reels. This can be easily done with the “Spin” button. To learn the rules and features of the gameplay, you should click the “View payout” button.

On the playing field, there are images of a cobra, an elephant, a peacock, a heron, a monkey, a tiger, card symbols and, of course, an extraordinarily elegant palace. All these pictures can form prize combinations, but the most anticipated and generous images are the following:

Each image has its own fixed multiplier, the value of which varies depending on the number of pictures on the line:

Above are the coefficients for combinations of 3, 4, and 5 symbols, respectively. Note that in some cases, it is enough to have two matches for the combination to be considered a winning one. However, the ratio in this case will be minimal.

The Adventure Palace slot machine offers the possibility of doubling the prize amount for players. After receiving a winning combination, the player is invited to play the doubling game. The player’s task is to guess the color or the suit of a playing card. If the color of the card is correct, the player’s bet is multiplied by 2. If you guess the card suit, the bet will be increased 4 times.

The slot’s demo version will be more acceptable for beginners. It is advantageous in that it makes possible to get acquainted with the features of the game without losing the invested money on errors.

Not everyone has enough courage for adventures in the impenetrable jungles since they conceal too many dangers. However, experienced players know that risk helps to get not only unforgettable emotions, but also a significant cash prize. In any case, the search for treasures around the fairy-tale palace will bring incredible pleasure, and you will definitely want to continue the game.

Despite its classical design and traditional rules, the Adventure Palace slot machine is very interesting to play. Developers from Microgaming have done their best to make the gameplay unpredictable and exciting.