Ariana slot machine invites gambling divers to the majestic world of the sea depths, where Queen herself will escort the luckiest of them. 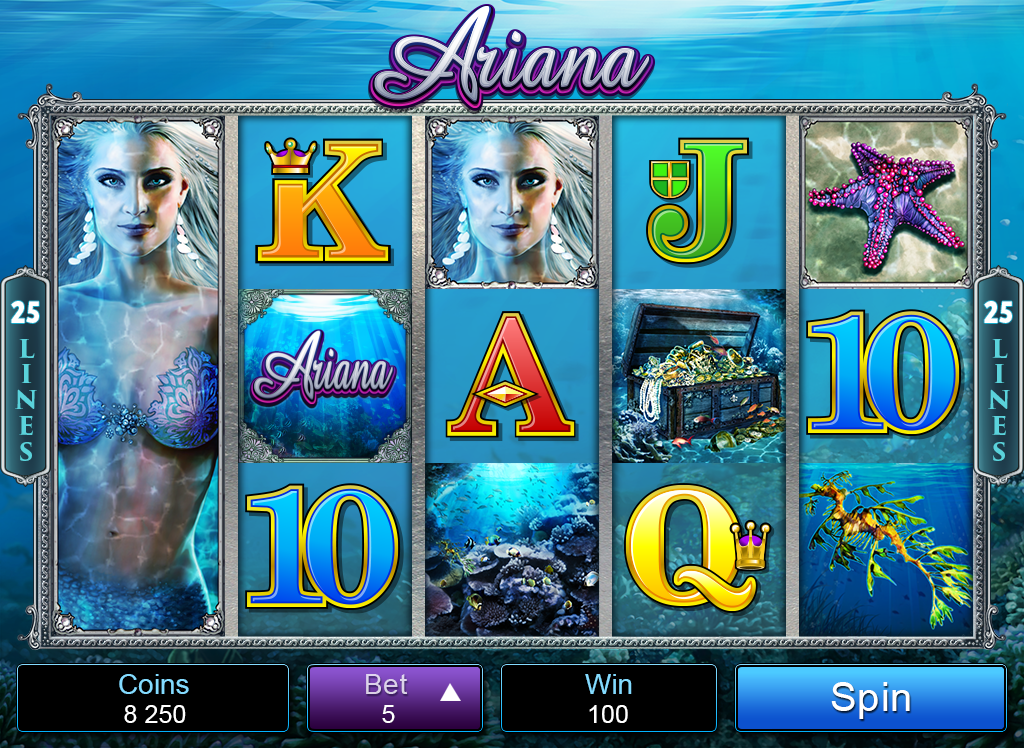 The Microgaming again send players to exciting trips, the purpose of which is to find treasures. This time the adventurers will explore the seabed, and the mysterious Ariana will help them in this. Only the most courageous and successful players will be able to return from the sea voyage with incredible riches.

But now let’s talk a little about some numbers. Microgaming slots have always had a high return rate, and the Ariana is no exception. The slot’s rate of return is 96.7 percent. As a maximum, you can win 30 000 chips; the cost of each is 125 credits.

This is a classic 5 reel emulator with 25 active pay lines. You cannot change the number of the lines, which makes the game much simpler. In the Ariana slot, an interesting feature is implemented: pressing the “Stop” button can stop the rotation of the reels. Thus, the player can affect the frequency of prize payments.

You can change the bet size using the Betting field. The minimum size of the bet is 0.25 (i.e. 0.01 credit per line) and the maximum is 5 credits per line and 125 in total. Using the “Spin” button, you can start one rotation of the reels.

For those who don’t like to constantly press one button, there is an automatic mode. You can simply enjoy the game, especially if you play the Ariana slot machine for free, looking at the consecutive rotations of the reels.

It’s easy enough: you just need to set up the automatic play mode by clicking the “Auto Play” button. A field with settings will appear on the screen, where you need to select the necessary functions and start the spins.

Those players who wish to read the rules should click the “Payments” button on the right. After that, the player will be able to get acquainted with all the rules and features of the slot machine, as well as to learn the payout ratios for different symbols.

Features of the Ariana slot

All symbols, except images of playing cards, are referred as “high”. With the exception of the scatter, they all can form combinations on the first reel, which will bring huge prizes if you play the Ariana slot machine for real money. It makes the game much more interesting.

If we have three identical “high” symbols on the first reel, then the remaining “high” symbols will also be expanded to all the reels (only if they are part of the winning combination). In this case, the wild and scatter symbols are exceptions in usual games. In bonus rounds, the only exception is the wild. The image of Mermaid can expand on any reel.

As usual, we’ll start from the most popular, desired and profitable symbols in any slot machine. Of course, first of them is the wild. In the Ariana slot, the role of the wild symbol is played by an image with the name of the game. It replaces any other symbol except the scatter, and can also form winning combinations. For three, four or five such images on one active line, a lucky player can receive prizes with coefficients of 250, 375, and 1250.

The next symbol in terms of profitability is the scatter. As usual, the scatter symbol forms combinations regardless of its position on the reels. The scatter looks like an image of a sea star. 3, 4, or 5 such images activate free spins. Great prizes are waiting for those players who will be able to collect two, three, four, and five scatters with the coefficients of 125, 250, 1,250, and 12,500, respectively.

Ariana is one the most profitable of symbols. It is extremely rare and has a special status. To activate a special rule, which was mentioned earlier, it can appear on any reel, not only on the first one. Ariana has coefficients of 150, 300, and 1000 for three, four, and five images on an active pay line.

A strange marine plant is the second symbol in terms of profitability. It brings the coefficients of 125, 250 and 875 for three, four and five images on the line. Next is a chest with sea treasures. It gives you a slightly smaller win: 100, 200, and 750 credits for each one you put.

The image of the sea depth is frequent enough to form prize combinations on its own. So the luckiest player can break a big jackpot. Those who can collect three, four or five such images on one active line can receive prizes with coefficients of 75, 150, and 650.

The sea of free spins!

The free spins are activated by a combination of three scatters. They are played with the bets of the previous spin. The number of free spins is 15.

There are no specific rules for them, but a couple of minor changes were added. Now not only the “high” symbols, but also the wild can expand to all reels if any symbol completely occupies the first reel. For the expansion of Ariana’s symbol, it can be on any reel. In addition, with the first reel full of wilds in the Ariana slot machine, you can restart free spins and get an incredible prize.