Big Bad Wolf slot offers players to visit the cottages of three piglets, where you will be able to help them to escape from the wolf and to earn some extra cash. 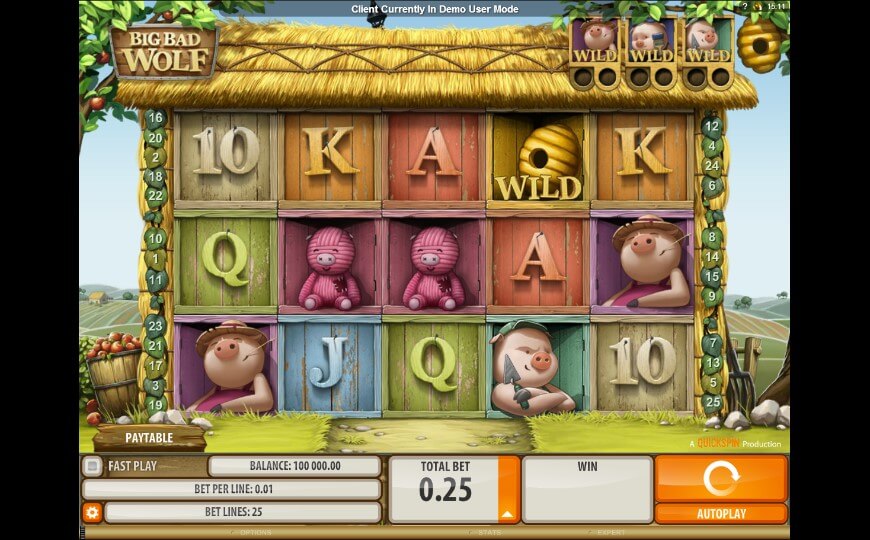 Most of us certainly know the story of the Wolf and the three little pigs. The game’s cool design and features have attracted online casino players. People got acquainted with this story 170 years ago in London, where it was first issued in 1843. The initial interpretation of the story in English, from where it is derived, was lost long ago. In our time, you can find many various versions of this incredible tale. In one of them, the gray criminal fell into a cauldron of boiling water and was eaten by the piglets. It sounds like a real thriller, not a story for children.

The company QuickSpin from Sweden has presented its own version of the adventure of three pigs. They’ve developed the Big Bad Wolf gaming machine, which you will surely love at first sight.

In QuickSpin’s Big Bad Wolf, the player gets acquainted with the three little pigs in their little houses and the big ugly wolf trying to do everything in his power to break into the houses. The game contains a lot of cool features that give it an extra twist and now, a couple of years after its launch, QuickSpin has added a new long-awaited feature in the form of the loyalty coins. The loyalty coin increases the player’s abilities and can be used to activate the bonus game.

Big Bad Wolf has been a favorite of many online casino players since its launch. At the opening of the game, the player sees the first pig’s cottage made of straw. Instead of revolving reels, here you will see crates with symbols falling from the top row to the lower one. While they fall, you can examine the room, where the pig lives, as well as its bed and stove. Nearby, there is an apple tree and a boundless field. The player can see other cottages, but first he must find the Wolf and activate the free spins. In addition to the impressive graphics, the slot features original soundtrack that will also bring you pleasure.

The Pigs Turn Wild bonus feature works in combination with the above mentioned Swooping Reels feature and this is absolutely amazing! As we mentioned earlier, symbols that are part of a winning combination blow away and leave room for new symbols, giving a new winning chance during the same round. If you repeat this feature several times, then Pigs Turn Wild will be activated. At the next wins during the same round, the pigs will turn into wild symbols. This means that after 6 consecutive wins, you can get 4 wilds if you are lucky. It means nothing but huge profits!

In the original tale, nothing is said about the fact that the little pigs were fond of cards. However, the Big Bad Wolf will arrange for players a meeting with all face cards and Tens, and give them from 5 to 100 demo coins.

The symbols of a toy pig and three real pigs can make a player wealthier by increasing the bet up to 300 times. But even this cannot be compared with a thousandfold increase, which awaits the player in the case of receiving five pictures with a bee hive. In addition, the hive is a wild symbol with the ability to replace any other symbols, except for the scatter.

However, Big Bad Wolf offers players more chances to make a profit playing for real money because there is not one but four wilds in the slot! If you take a closer look at the top part of the monitor, you’ll see the images of the three piglets. Each picture is accompanied by two cells. If you won twice in a row, then the first piglet becomes a wild symbol. In the case of six winning combinations in a row, all three cute pigs will turn into wilds.

The wolf image plays the role of the scatter. When a player receives three pictures with this predator, he or she is granted 10 free spins. Before they’re started, you will witness a sad event on the screen: The wolf destroys the straw house and starts chasing the first piglet.

Be careful, the wolf went hunting!

In the Big Bad Wolf slot, the symbol of the wolf and the bonus symbol of the Moon, which is also associated with the gray predator, are of great importance. After the wolf activates the free spins, there will be six cells displayed at the top of the screen. The player’s goal is to fill them with a special Moon symbol that can only appear during the free spins. Having collected three images of the moon, you will receive two additional free spins as a reward, and a hungry predator will destroy the second pig house. After receiving the next three signs of the Moon, the player will again get two additional free spins and will be able to double each payment.

After the last Lunar symbol falls into its box, the wolf breaks into the brick house and steals all the little pigs. But the unfortunate piglets still manage to avoid the fate of becoming a dinner for the predator. When a wolf breeds a bonfire and already imagines how he will eat fried pork, the piglets run away, having freed themselves from the bag with the help of scissors.

The QuickSpin company is not as known as NetEnt or Microgaming, but it’s a very reliable software supplier. Since its foundation in 2013, they have created bigger than 20 video slots that maintain a consistently high level of quality.

Crystal Queen, The Epic Journey, Spinions Beach Party, and Razortooth are just a few examples of QuickSpin slots that quickly became popular among players. This means that they will soon acquire the much-needed understanding of what is demanded in terms of design, bonus features, sound effects etc. to create the best possible end product.