Castle Builder slot is a new gaming device, which is described by its developers from Rabcat as “The next generation of slot machines”, and we can safely agree with this statement. 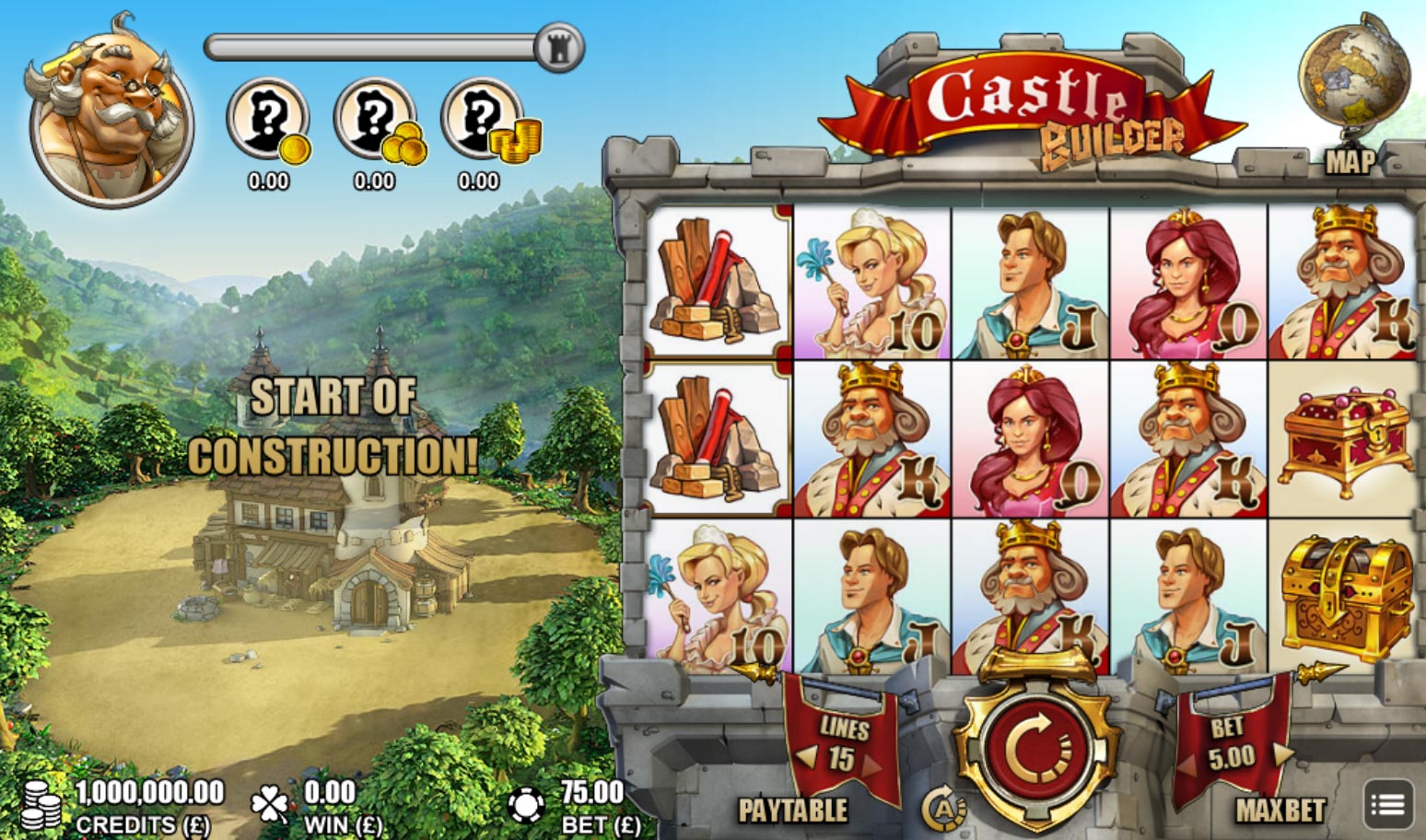 The slot’s theme is based on the idea where gambling is combined with a saga that tells about power, riches, and castles. The task of the player is to turn the reels and to gather together the building symbols. The more rewards you get with the symbols, the faster the castle will be finished that the King asks you to build.

The welcome screen in this video slot is definitely worth mentioning. When you first see it at the beginning of the game, you can notice a map that has an overview of three kingdoms. Then, you will be thrown directly into the action taking place in one of the kingdoms, which is called Forana.

The kingdom’s ruler, King Lomquer the Third needs someone who can build a castle for his daughter. The matter is that she is going to get married and needs a place to live together with her beloved Prince. By clicking on the flashing blue circle on the map, you can get your first order: to build a small summer house. When you successfully finish this task, the next building will be “unlocked” and so on, until you have completed the construction of the whole castle complex for the princess.

The game layout in Castle Builder slot is composed of 15 pay lines, and players can choose how many of these they want to activate. The bets in the game are changeable in the range from 0.01 up to 1 pound. Therefore, when all lines are activated, the lowest and the highest possible bets will be 0.15 and 15 pounds. If you really want to get the maximum effect of the game, click on the “Bet Max” button. Of course, the game is equipped with the AutoPlay function, which allows you to launch between 5 and 500 spins per one click.

In the basic mode, the game screen consists partly of a set of playing reels with five columns and three rows, and partly of a plot of land, where you see the progress in the construction project. The graphics throughout the game are also incredibly beautiful, and you can get a feeling of being in a fairy tale. In the Castle Builder slot, all symbols on the reels correspond to the theme of the game, and you can see princes, princesses, chests with treasures and bags full of gold coins.

It may be a bit surprising for many players, but Castle Builder slot has only one special symbol in the form of a Joker. However, there are some other bonus features in the game.

The wild symbol, depicting an older man, serves as a substitute for all other pictures in the game, which is quite normal for this symbol. In such a way, it helps the players to form prize-winning combinations on the reels. For building symbols, there are four different types, which are referred as “standard”, bronze, silver, and gold ones.

When the player has managed to get a combination of at least two symbols on an active pay line, this will enable a meter that shows his progress in the current construction project. The faster you gather together all the combinations, the faster the building process will be completed, and the larger value this castle will have. When you finally finished with the castle, it will be time to choose a Prince for the Princess. You will have to choose between three different admirers, and each of them has his own price. If you’re lucky and the admirer you choose has a lot of money, you’ll get a part of his wealthy. If you’re not, you’ll get a little less gain.

Most players don’t think about it, but the time of loading a video slot is a pretty good indication of how advanced graphically the game is and also potentially how many different features it has. As a good example, the Castle Builder slot that comes from the Rabcat team takes quite a long time to load, and the game developers from Rabcat confirm this fact. However, when you see the welcome screen of the game, you will really understand why. In fact, this depends on the level of the game’s graphical design, and the number of different bonus features. So, here we have one of the slots that take a while to load.

Castle Builder slot is an incredibly wonderful gaming machine in every possible way, especially when it comes to the game’s graphics. In addition, there is a huge amount of different bonus features.

Castle Builder has been based on an idea that is quite unique. Namely, it has combined playing on a slot machine with an illustrated adventure story about power, wealth, and castles. And the task of the player is to rotate the reels, thus assembling the winning combinations of building symbols, and ultimately to build the castle. The more gains you get from the building symbols, the sooner you can construct the castle for the king and his daughter.