Eagle’s Wings slot machine tells about a bird that is a sacred symbol for North American Indians. 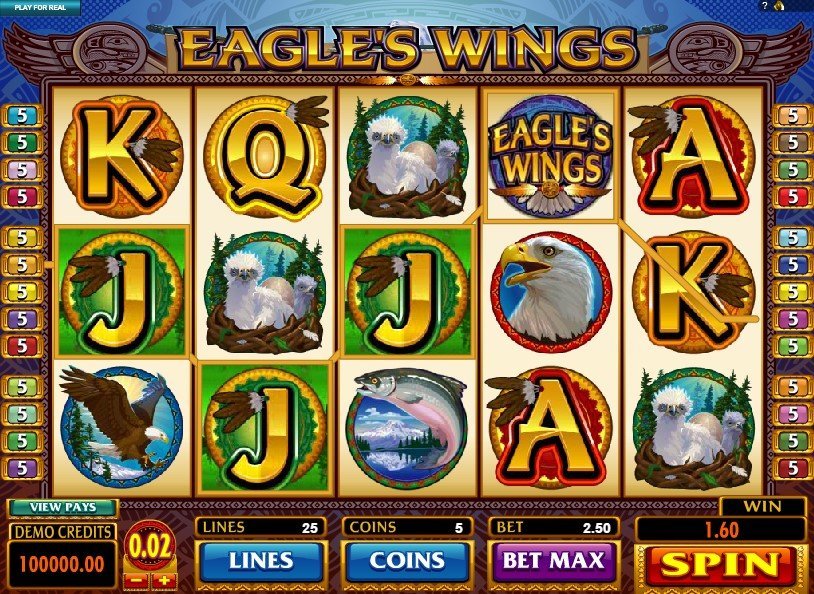 The bald eagle is depicted on the US national emblem and on the banner of the US president. Microgaming, the developer of this gambling device, offers players to learn more about the history and culture of the indigenous peoples of America and to get significant prizes.

Five reels of the slot accommodate twenty-five horizontal pay lines. And there’s a beautiful big bird flying right in front of them. During the game, you will be dealing with special symbols and bonus free spins with tripled payouts. You can bet from one to five coins on each of the active pay lines. The number of the lines can also be changed. The total size of bet per spin can reach £31.25.

Both beginners and experienced players can play the Eagle’s Wings slot machine for free, which is convenient and fun. Prize-winning groups are formed from three or more identical symbols located on one active line, starting from the first column on the left. The size of the prize payment is calculated by multiplying the bet and the payout ratio of this symbol. All coefficients can be found in the payout table, the highest of them is 1000 bets. Multiple prize payments, which appear simultaneously on different lines, are added together. Winnings are paid for the longest chain of symbols.

In the Eagle’s Wings slot machine, there is no doubling round, so all payments are immediately sent to the client’s game account. A progressive Jackpot is also not available.

On the reels, there is an image of a bald eagle in flight, its nestlings, and the fish that they eat. Playing cards from jack to ace, decorated with feathers, also bring players certain surprises.

The game’s logo plays the role of a wild symbol. It can be found on any reels, and also forms prize combinations independently. In addition, it complements combinations of other pictures, doubling their cost.

The amulet with the image of a bald eagle plays the role of a scatter symbol. It is not able to form any prize combinations independently.

Scatter symbols can appear at any place on the playing field. In this game, the player is asked to choose one of three scatters to determine the number of free spins. If you play Eagle’s Wings slot for real money, you can get up to 60 bonus free rotations. In this case, the game is played with the last bet, and the total result is tripled.

Under certain conditions, the free spins can be prolonged. During free spins, winnings are usually more frequent than usually and can significantly improve the player’s financial situation.

Players have the opportunity to simply admire the colorful gambling machine, having fun in an automatic mode. Its control panel is not too complicated. The slot’s free demo version is best suited for learning all the subtleties of the game.

To control the gameplay, there are the following keys:

Information windows display the total size of the bet and the current win.

Customer settings allow you to turn off the music and play in silence. Besides, you can turn on the automatic spin mode, or read the reference information by clicking on the button with a question mark. You can see this button in the upper right corner of the screen.

At this point, we can leave the game, because our result is positive. But we’ve decided to take a chance one more time. And we get four wild symbols and a prize of 170 credits. Now, the score is 2173.75.

Now we think that we should not take any further risks since we do not want to lose the money. We earned 173.75 pounds in 15 minutes, considering that one coin in this online casino is equal to one pound.

If you have several unsuccessful spins in one game, try to add several active lines and increase the bet. This will help you win.

Let’s choose a gambling club, register an account, make a deposit, and play the Eagle’s Wings slot machine, because the bald eagle will certainly bring you luck on its wings.