Fish Party slot machine invites you to a great party with crazy fishes that will reward you with bonuses and a cheerful mood for the whole day. 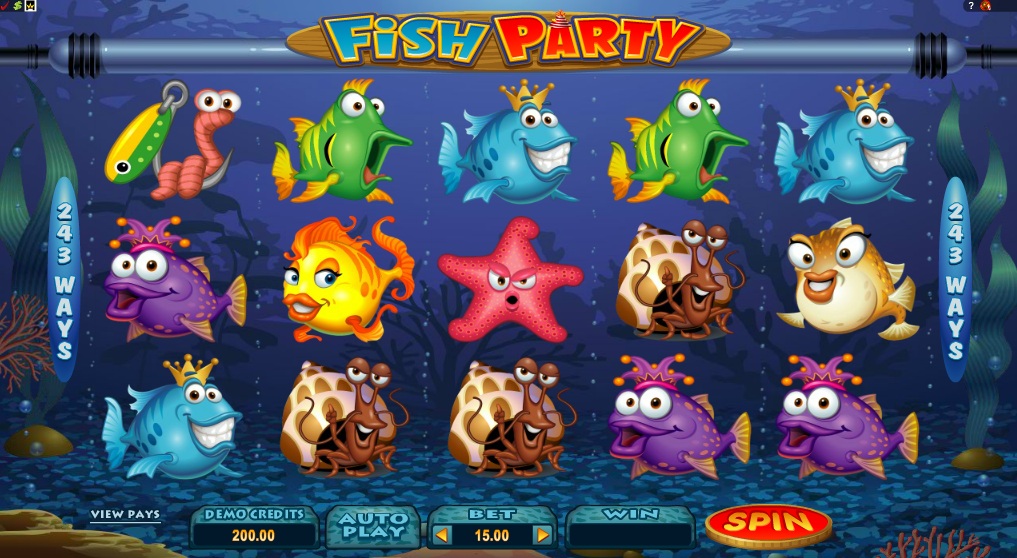 Who knows what secrets are hidden at the bottom of the sea? Perhaps there still can be found sunken ships or ancient marine inhabitants. And maybe legendary mermaids and newts also exist? Despite the fact that modern research methods allow us to learn much about the depths of the sea, there are still a lot of things that are unknown and hidden from us.

Developers from Microgaming decided to treat this issue with humor. They suggested that not only people, but also fishes like to make fun noisy parties. And it’s quite possible, if you turn on your imagination to its fullest. That’s how the Fish Party slot machine was born. The game has turned out to be really interesting and fun. Animations of fishes, amusingly curling after each win, are unlikely to leave anyone indifferent. It’s a must-see for all fans of gambling and slot machines.

The developers have demonstrated a non-standard approach to the creation of the game. First of all, this is expressed by the absence of the usual pay lines, which are almost mandatory in all slots. Instead, there are 243 ways of winnings on the reels. The main condition is that the symbols should go from left to right in a row, without missing columns.

The Fish Party slot machine is characterized by fairly simple rules of the game. There are no multipliers for winnings that are common for most slots. Each combination brings you a fixed number of coins and directly depends on the value of the coins and their number. The minimum value is 0.01 coins, the maximum is 0.05. You can bet from 1 to 10 coins.

Features of the Fish Party slot

The layout is very classical. Like many other slots, it features five reels with three lines and holds a total of 243 fixed winning paths. What distinguishes it from other machines is, of course, the theme. This slot machine is played at the bottom of the ocean among lots of festive fishes. In addition to fishing in a variety of colors, you will also get acquainted with at least two bonus symbols in the form of wilds and scatters.

The most lucrative of all symbols is the shellfish, which also acts as a scatter symbol and activates free spins. Your task is to get a winning combination of these symbols, running from left to right. Before each spin, you have the opportunity to specify your bet by selecting both the number of coins and the coin value, which you want to play with. Finally, you need to click “Play” at the bottom right.

Besides regular symbols, Fish Party slot has two special symbols that increase your chances to win. In addition to the wild symbol, there is a scatter symbol that brings a direct win, if two or more similar symbols appear on the reels.

In addition, if there are three or more scatter symbols on the playing field, free spins will be launched. Their quantity directly depends on the number of scatters that you have on the screen.

In addition, the bonus games have two distinctive features. The first is that they can be restarted, if the scatters appear again in the process of the bonus spins. The second is that there are only the most valuable of symbols on the reels during the rotations, which significantly increases the chances and amounts of winnings.

Each win in the game can be doubled thanks to the ability to play a bonus round, where you have to guess a card. There are two game modes available ‑ in the first one, you need to guess the color of a card lying face down. If you’ve managed it, the win will be doubled. In the second variant, you can try to guess the suit of the card. If you succeed, you will get your winnings multiplied by 4. Having won in any version of the risk game, you can either collect the win or try to increase it again.

The Fish Party slot machine will appeal to those players who are fond of gambling, and who never miss the opportunity to have fun.