Golden Era slot machine allows you to feel like a real hunter of gambling, to immerse yourself in the world of fantastic adventures, and to become a winner. 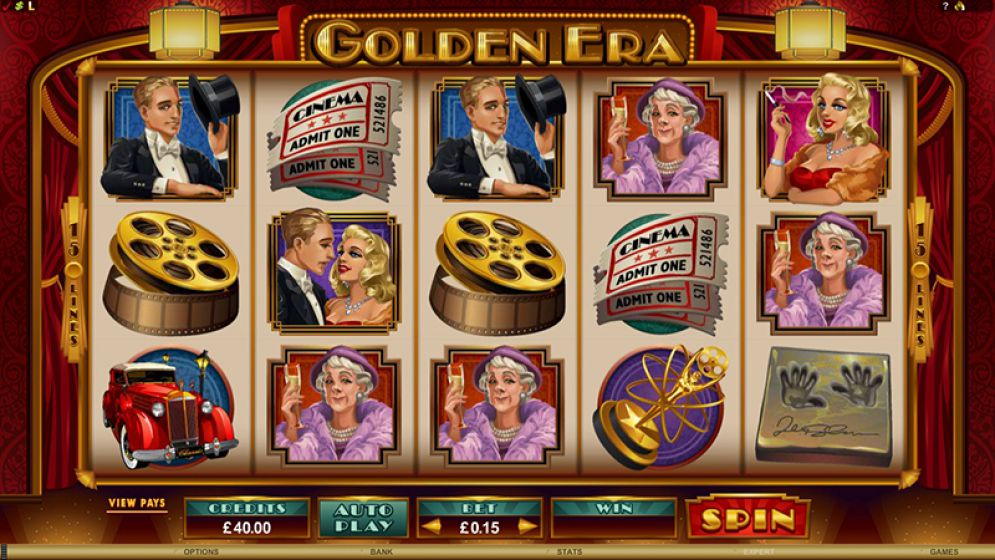 The Microgaming has regularly delighted players with fascinating game stories, but this time the manufacturer exceeded all expectations. The game takes you to the era of the 30s, the time, when the cinema was just beginning its development. You will be presented with wonderful actresses and matchless actors, a brilliant game, live music, and the special perception of the world. It is this incredible atmosphere, that Golden Era offers you to appreciate.

The Golden Era slot machine is based entirely on the cinema theme, and each player will become the real star of a movie. The emulator is controlled in a completely traditional way. First of all, you need to place bets on each line. The slot consists of 15 game lines, and each of them can potentially bring prizes. The size of the bet varies from £0.01 to £4. This range allows playing for both cautious players and those who prefer higher risks. The only thing you cannot do is choose a certain number of pay lines. In this game, all 15 lines are always active, and the bet must be placed on each of them.

The function of starting the reels is assigned to the “Spin” button. You can stop the rotation at any time by clicking the “Stop” button. The game features an automatic mode of the reels, triggered by pressing the “Auto play” key. In this case, the player doesn’t have to change the settings before each rotation, all he needs is just to select the amount by which the slot will play automatically.

This emulator, filled with the atmosphere of the cinema of the 30s, can work in two modes. The first of these is a real money game, when the user needs to make a deposit to his gaming account. The second is the demo mode, which allows playing the slot for free. Its demonstration mode allows you to familiarize yourself with the features of the game without any losses, to gain experience, and to become a true master of gambling.

When you feel that you know everything about the Golden Era slot, it’s time to switch to playing for real money. This will increase the acuteness of the sensations and give a chance to win a huge prize.

The design of the slot really corresponds to its theme. During the game, you will meet legendary actors and see their autographs, reels of film, tickets to the cinema, prints of celebrities’ palms, movie posters, and other attributes. Each of these symbols has a certain multiplier for the bet, and some of them have additional functions that make getting the prize as simple as possible.

Thus, in order to form a winning combination, you need to collect from 3 to 5 identical pictures in a row on one active line. In case of a win, you will hear triumphal music, and the winning amount will be displayed on the screen. It is formed according to the bet and the results of the round:

Please note that the coefficients are very high compared to other gaming machines, so it makes sense to risk in the game for real money. Besides, the wild symbol (the game logo), replacing all images except the scatter, helps you to achieve the desired result. Its role is played by a festive cracker, which doesn’t have to be arranged on an active line. When three such symbols appear in absolutely any place on the screen, the player receives 12 free spins, during which there is an excellent chance to get additional bonuses.

And there is also an opportunity to increase the prize. However, this feature is implemented in a very unusual way:

If the image of a gentleman appears on the first reel, and the woman with a cigar on the fifth, then in the further spins they will approach each other. If the couple manages to get together on the 3rd reel, the player’s prize will be doubled.

Another distinctive feature of the Golden Era slot is that it offers a choice between free spins and a bonus game, when the scatters appear. In the bonus game, the player has to open posters with hidden gifts. However, there can be tomatoes hidden under some movie posters. In this case, the player will be returned to the main game field, with the winnings received before this moment being retained.

This emulator doesn’t offer an opportunity to participate in the risk game. But with high payout ratios and a huge number of surprises, its absence can hardly be called a drawback. The Golden Era slot captivates players with its inimitable atmosphere and great possibilities. Don’t miss the chance to try your luck!