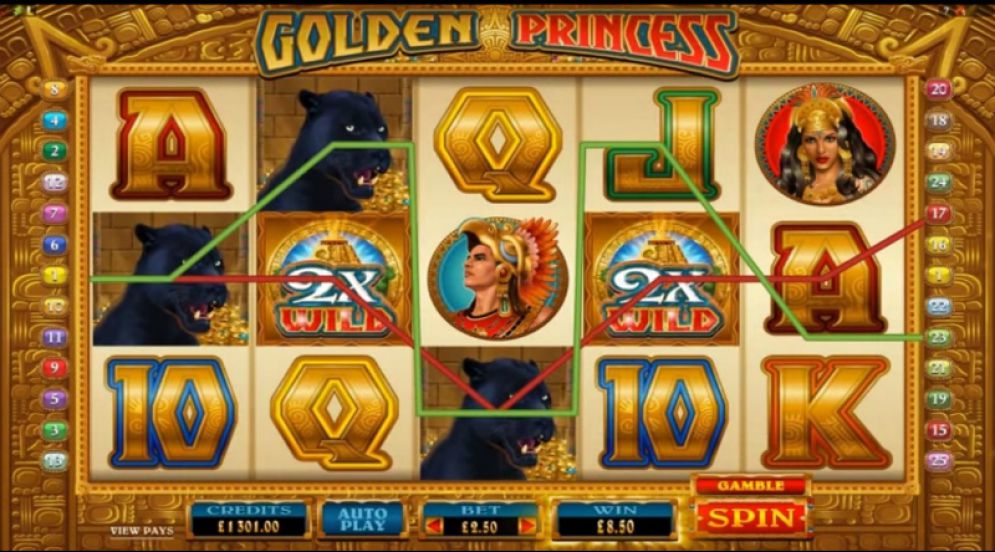 Far from the nosy eyes, there lives an ancient Indian tribe, headed by the Princess. The slot’s five reels with a variable number of lines (from 1 to 25) are decorated with images of a black-haired beauty, a leopard, a black panther, a faithful friend of the princess, and card symbols.

On the visible part of the display, you can see 15 cells arranged in five vertical and three horizontal rows. The bet per line can be from one to ten coins ranging in price from one to ten pence. That is, you can bet from one penny to 25 pounds per rotation.

In the Golden Princess slot machine, Microgaming developers implemented all the usual functions, such as regular and special images, doubling games, free spins, bonuses, and multipliers.

Prizes are awarded for combinations of identical pictures on active lines, starting with the first column. The prize amount is equal to the product of the bet for one line by the coefficient of the symbol from the payout table, ranging from five to 5000. Some symbols have special characteristics in terms of payment. Payments for several prize chains on different lines are summed up. You can double your prize payment by entering the risk round.

To increase your current prize, choose what you want to guess: the suit or the color of a closed card. After activation of the risk round, a new window will be opened, where you see several playing cards. If you have guessed the color, the current winning is doubled; having guessed the suit, you multiply its amount by 4. You can make several attempts until a certain limit is reached.

On the reels of the Golden Princess slot, the princess of the ancient South American Indians and the brave warrior in a complete outfit are coexisting with panthers, leopards and gold symbols of playing cards from tens to aces.

Special symbols in this gambling machine are the game logo and the treasure chest, playing the roles of the wild and the scatter, respectively.

Here are their qualities in detail:

All details about payments can be found in the table of payouts, which is opened by clicking on the “View Pays” inscription.

The selection of the bet size is executed in an original manner. You can specify a distinct number in the window above, which the word “Bet” is written, or call a popup sub-menu by clicking on it. It’s the place, where you select the number of active lines and coins, as well as the nominal value of the game credit.

After starting the reels, you can stop them at any time by clicking on the same key. The “AutoPlay” button helps to accelerate the game even more. The main rules and algorithm of the game, features of special icons, and bonus options are described in detail in the payout table and reference section.

We have 2000 credits on the account. The bet size is 25 credits. Press “Start” and get a prize of 5 credits. A few subsequent spins are in vain. The score is down to 1930. We cannot change the settings, because we have already set the maximum possible values.

Start the reels again manually, and get a prize of 100 credits. Now we try to double it, and we’re lucky: the sum grows up 200 credits. The total score has increased to 2105 credits. Given that one credit equals to one pound in this online casino, we’ve earned £105 in just a few minutes.