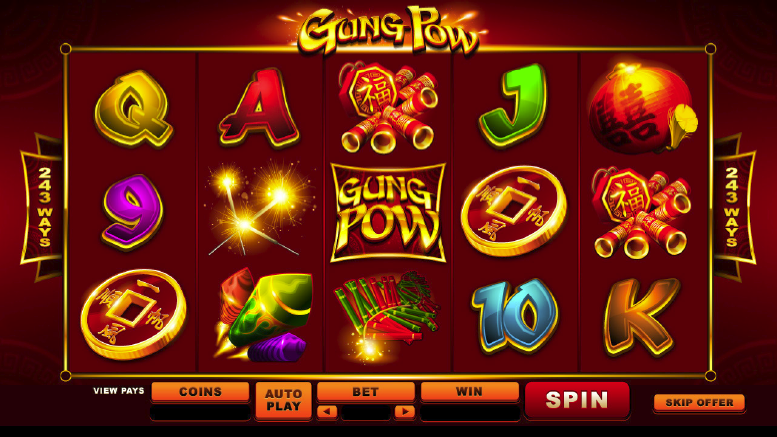 Fireworks, magic signs, red paper lanterns, and fantastic prizes attract everyone, who loves the festive atmosphere and the excitement of gambling.

The Chinese New Year is always associated with one of the twelve legendary animals. They include a fairy dragon and ordinary creatures, such as a bull, a rat, a monkey, etc. But every year it is celebrated with fireworks and dances in the squares of all cities. On holidays, the Chinese always launch paper lanterns, inside of which there are lighted candles. We can see all the attributes of the New Year in China on the icons of the slot’s five standard reels.

There are no active lines in principle. However, the slot offers 243 variants of winning combinations. You will see all of them in the payout table, which can be opened with just one move. Pictures on the screen are arranged in three rows. On the playing field, there are 15 pictures next to each other.

The accepted bet size is always a multiple of 25. The maximum possible one is 250 coins. As there are no lines, you will have to bet per one spin. The number of coins and their value are also taken into account.

The Gung Pow slot machine is available to play for free, which is fun and useful. You can learn how to use the game’s algorithm and options, and also develop your own tactics and game style. The result will depend not only on the betting amount, but also on the symbols involved in the spin. If the payment isn’t high enough, it can be increased with the help of a risk round. Green spins and other options make the slot attractive for both beginners and experienced players.

Prize payments are delivered for several identical pictures. They should be arranged in a row, starting from the leftmost column, no matter on which line they are located. The prizes are given for longest chains of symbols in accordance with the coefficients specified in the table below: from 2 to 3000. If there are several prize groups, their amounts are summed. You can immediately collect the prize or try to double it by activating the chance game.

In the game, you will be offered to guess the color of the dealer’s card.  If you guess right, the amount is doubled. You’re allowed to make several successive attempts, before you reach a certain limit.

Microgaming artists have decorated the reels of the slot with images of Chinese lanterns, fireworks, festive crackers, Bengal lights, and multi-colored symbols of playing cards from nine to ace. All these pictures are merrily revolving on the game screen.

There are also two special pictures: wild (the game’s logo) and scatter (a coin with a hole).

These pictograms have some specific features:

In the control panel, you can activate the automatic rotation mode. In this case, you’ll see a pop-up menu that gives you the ability to select various numbers of Automatic spins.

The process of choosing bets in the Gung Pow slot is very simple. The player only needs to select the required number. Clicking on the box, you will open a submenu, where you need to specify the number of coins and their value.

In the winnings table, all possible prize combinations are described in detail. The button with a question mark opens the Help section, where you can read the game rules.

The buttons of the slot’s settings allow you to change the gameplay: adjust the sounds, the speed of the reels, and parameters of displaying the balance.