Hitman slot machine will tell you about the world famous Agent 47 and his adventures. 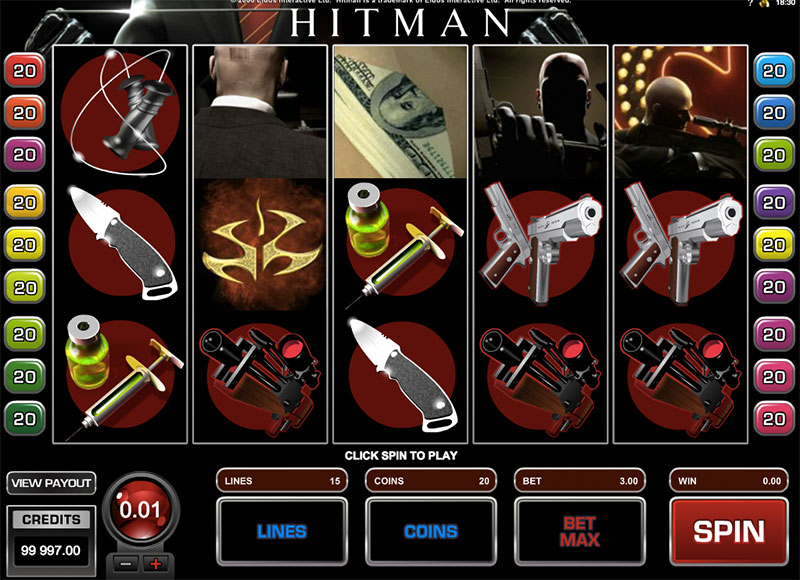 It should be noted that Microgaming, the creator of the gaming machine, developed the game under the corresponding license. This means that the slot completely corresponds to the movie and computer game. Technically, the slot includes 5 reels with 15 pay lines, as well as the traditional symbols of scatter and wild.

Before starting the reels, the player must specify the parameters of the round, such as the value and number of the coins used for betting. This choice is made using the “+” and “-” keys. In addition, you should also define the number of active lines from 15 possible ones. A player can place a bet of up to 20 coins per active line.

By pressing the “Spin” key, you will start the reels. After stopping the rotation of the reels, the slot automatically starts to check the generated winning combinations. Prizes are awarded for combinations that consist of identical symbols arranged along one active line from left to right, starting from the first reel.

You can see the winning combinations and payout ratios for them at any time by pressing the appropriate key. The functions of a wild symbol are performed by the image of the game’s main character (Agent 47) with pistols and arms crossed on the chest. This symbol can appear only on the reels 2, 3 and 4 and, if necessary, replace icons that are missing to form a winning combination, with the exception of bonus symbols. The special “Laptop” symbol opens the way to the “Contract” round. To do this, it is necessary that 3 pictures with a laptop appear on the reels 3, 4, and 5.

A picture with the logo opens access to the bonus round “Insignia”, when it appears on the reels 1,2, and 3 at the same time. A player gets the right to free spins, if he sees at least 3 scatters ‑ pictures with the number 15 ‑ on the playing field. The more scatters appear anywhere on the playing field, the more bonus spins the player receives.

Other pictures are considered as common and bring good winnings by forming prize combinations. Among such symbols, there are images of a rifle, a pistol, the back of the protagonist’s head, and so on. In the “Insignia” bonus round, the player must choose one of the three orders. The size of the winnings will be determined via multiplying the size of the bet by the payout coefficient of a certain winning combination.

The “Contract” bonus game always causes incredibly strong emotions among users. Here, you’ll have to choose one of the five victims of the killer. The killing of each ordered criminal carries a sufficiently high risk, which corresponds to a certain multiplier. After selecting the target of the operation, you also need to specify the weapons for its implementation. After that, a new window pops up displaying the killer’s performance. The multipliers for the prizes are defined randomly. The final size of the winnings will be equal to the product of the bet by the coefficient of the chosen victim, and also by the random multiplier selected at the end of the round.

Features of the Hitman slot

The slot’s detailed storyline provides a high level of player’s interest and involvement in the game. So, each victim will be described in detail in a biographical report, and the result of the operation will be displayed in the form of a newspaper article. Therefore, it’s always very interesting to play the Hitman slot machine. This can be confirmed by a large number of players, because the slot has recently enjoyed increased popularity according to available statistics. Of course, this is quite understandable. Even when the slot only appeared on the market of gambling, the interest of players to the game was explained by the great popularity of the movie. Moreover, the slot contains a lot of real opportunities to win quite significant cash prizes, and this is very important for all fans of adrenaline rushes. And the Hitman slot machine is definitely worth trying for all those, who haven’t done it yet.