Hot as Hades slot is a funny and comical story about the heroes from Ancient Greek myths. 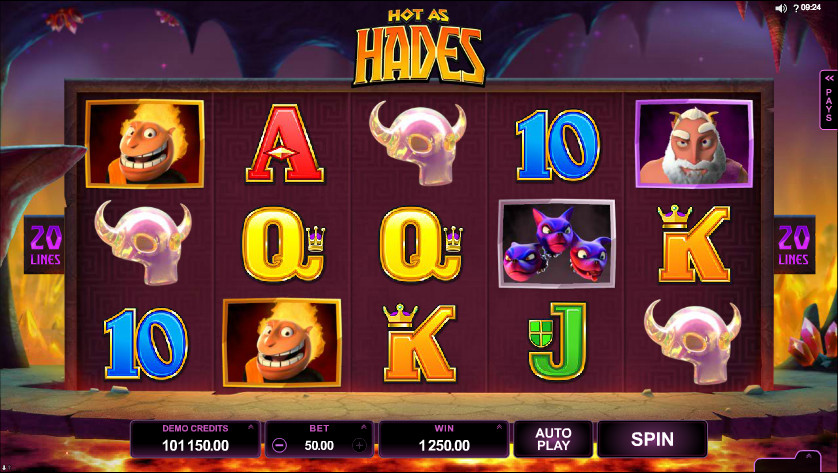 The slot dedicated to ancient Greek myths consists of five reels and 20 permanently activated pay lines. The visible part of the playing field accommodates 15 cells with pictures. Bets are the same for all the active lines, but their size can be altered from one to twenty-five coins. The value of the coins varies between 1 pence and 2.5 pounds. The total bet per spin of reels is 50 pounds.

If pictures are arranged in a group starting from the first reel on the left, they are paid according to the payout table. The number of symbols in a winning combination can be from three to five. The amount of payment is calculated by multiplying the size of the bet by the coefficient of the given symbol, from 5 to 2500.

Sometimes, you can get several prize combinations after one rotation of the reels. In this case, all payments are summed up and immediately sent to the player’s account. There is no doubling of prizes in this slot and a risk game is also not implemented.

On the cells of all the reels, you will find Hades who is the lord of the afterlife, as well as the three-headed dog Cerberus, the gods Zeus and Poseidon, Medusa Gorgon, and the card symbols.

The crystal skull with horns plays the role of Scatter, and the game’s logo is Wild.

A wild symbol can form prize-winning chains independently or supplement simple groups of pictures, except for the horned skull. The payment for a combination of ordinary symbols will be doubled in this case. During free spins, the wild increases the winnings even more.

The scatter symbol launches free rotations, if the Hot as Hades slot machine is played for real money. In addition, the crystal skull can form independent prize-winning chains and turns on bonus spins.

Five free spins can be activated at any moment. And when they are active, up to three cells are constantly occupied by wild symbols.

Three, four or five crystal skulls will turn on a bonus game. You will find yourself in a new window and will be asked to find a crystal skull. The game consists of several levels, where you will have to choose different items. For these items, you will get different prizes. In such manner, you will advance to the next level or finish the bonus round. All the nuances of the bonus game are described in the reference section.

While testing the Hot as Hades slot machine, the user will notice various buttons and information windows:

In the automatic mode, you need to choose the number of rotations, and to specify what to do in the bonus round. A button with a question mark shows the rules of the game in more detail. Custom settings allow you to adjust the quality of sounds or graphics, and also maximize your screen. You can specify the size of bet per line or per spin.

By the will of the gods of ancient Greece, we have 2000 credits on the account. Bet per spin is 50 credits. 20 lines are activated. On the screen, you see a strolling Hades with flaming hair or a barking three-headed dog. The animation makes the game even more dynamic and exciting. Click on the Spin button don’t bring us prizes, so we lose 25 credits. The score is 1975.

So we earned 2575 pounds in a just few minutes. The game has turned to be really fun and profitable for us.