Hot Ink slot machine is a game that tells about everyday life in a tattoo studio. 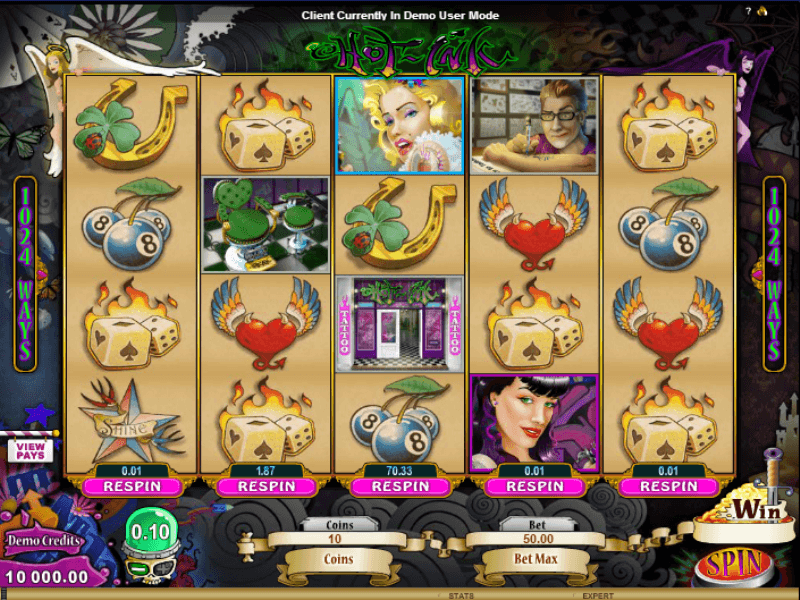 Hot inks help tattoo artists to do their work with the highest professionalism. With a lucky coincidence, any client will be presented with a gift. The original game options make this slot even more attractive and profitable.

Developers from Microgaming create true masterpieces among devices for virtual gambling. The screen of this slot comprises five reels, without usual activated pay lines. In the winnings table, there are 1024 opportunities to receive prizes. The size of the smallest bet is fifty pence, while the largest is £125. Players are allowed to place a bet ranging from one to ten coins of different value.

The display has buttons for adjusting the value of coins and their quantity. With just one key, you can instantly set the maximum possible bet. A large button called “Spin” launches spinning the reels. An icon called “View Pays” reveals all the secrets of prize-winning combinations.

Under each reel in the slot, there are buttons for re-spinning a single column of pictures. The customer pays for these spins, their cost is defined separately in each case, depending on the current bet.

The stylish design of the gaming machine is characterized by bright colors and interesting pictures. On the icons, there are portraits of skillful tattoo artists and original drawings for tattoos. An excellent soundtrack accompanies the gameplay. The well-designed slot attracts lots of players due to its realistic design elements and original game options.

Prize-winning combinations are formed from identical symbols that must appear in adjacent columns, starting from the first one. The payout is equal to the product of the current bet by the coefficient of the given image. Each symbol has a certain coefficient, which can be seen in the table of winnings. Different groups of pictures bring different rewards. If several prize chains were formed in one spin, the winnings are summed up and sent to the player’s account.

The Hot Ink slot is advantageous for playing for real money since it has a wild symbol in the form of the game’s logo in addition to the basic pictures. Five pictures with a Hot Ink inscription will bring you 1000 bets. This element is intended to supplement the prize-winning chains of regular symbols. Regular symbols of the game include such pictures as asterisks, horseshoes, dice, balls for billiards in the form of three cherries, a ladybug on a clover leaf, portraits of a blonde and a brunette.

The picture with two fishes, imitating the symbol of Yin-Yang from Chinese philosophy, is a scatter. When three, four or five pairs of fishes appear on the reels, a bonus game with free 20 rotations is launched. In this case, the paid re-spin function for separate reels doesn’t work. The bet size remains the same as during the last spin, before the start of the bonus round.

A plate with the name of the tattoo studio will also activate the bonus round.

Twenty free spins, which you can get from the images of fishes, bring prizes that are summed and doubled.

Three or more plates with the tattoo studio’s name will start a bonus game. In a new window, the player will be asked to open three albums with samples of tattoos. Each album hides a certain surprise for the player. If you get two albums with one series of drawings, another ten free spins with double prizes will be activated.

A distinctive feature of the Hot Ink slot is the diversity of its gameplay. The game’s free demo version allows you to learn all the options of the slot. They include functions of special symbols, free spins with doubled prizes, paid re-spins for separate reels, a bonus game with albums, additional free spins with doubled prizes. In addition, each basic picture brings its own contribution to the player’s wallet.

When you get enough experience and learn all the possibilities of the slot, switch to the real game mode. It’s very easy to do, you just need to choose an online casino, fill out a form, make a deposit, and start the game with the Hot Ink slot machine.