Immortal Romance slot machine will surely appeal to fans of the famous movie “Twilight” and other stories about vampires. 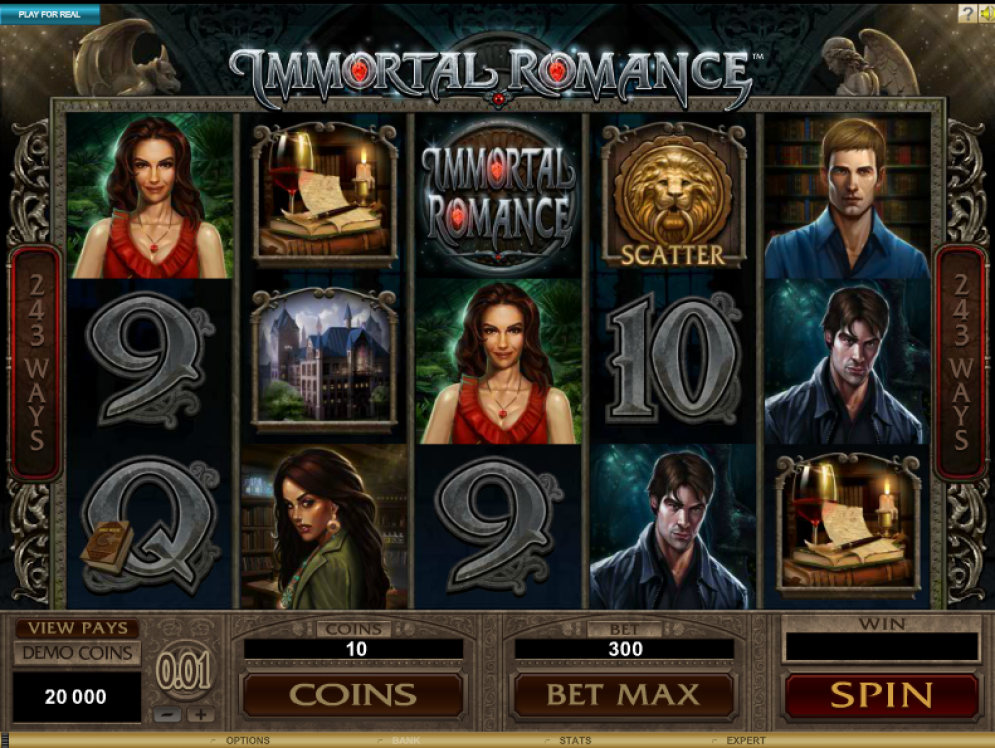 In the Immortal Romance slot machine, the developers from Microgaming tried to implement the plot in the form of images of all the most famous characters in this series. They include the prophetess of the future and past Amber, the vampire scientist Michael, the geneticist Sarah, and the Hungarian aristocrat Troy.

Five reels of the slot tell the story of true love, which will never end as its main characters are immortal. In the Immortal Romance slot, there are 243 active pay lines available for users. In addition, there are traditional wild and scatter symbols, as well as the famous vampires, opening access to additional bonus rounds. Of course, you can see a lot of beautiful old castles, and try to understand the intricate relationships with the secret love messages that have passed through centuries.

Before the start of the game, the player must use the “+” and “-” keys to set the value of the coins for betting. In addition, the gambler needs to determine the size of the bet per line in the range from 1 to 10. In the case when all 243 lines are active, the bet per line multiplied by 30 will be charged for one rotation of the reels. For those who prefer to play the Immortal Romance slot for real money with large bets, there is a “Bet Max” button that will automatically set the highest bet values.

Playing the Immortal Romance slot for free, players use virtual demo coins that will automatically be put into their accounts. After determining all the parameters, you can start rotating the reels with the “Spin” button.

The winning combination is a set of symbols that starts with the first left reel and consists of identical symbols in the amount specified in the special paytable. When all pay lines in the slot are active, the simultaneous appearance of any symbol on 1, 2 and 3 reels inevitably brings a certain gain.

The role of the wild symbol is attached to the image of the game’s logo. This symbol can independently generate winning combinations with payout ratios of 100, 250 and 1500. In addition, it can replace any other images, except for the scatter, helping to complete the formation of profitable combinations. If a combination is formed using the wild symbol, the win is multiplied by 2. The scatter symbol looks like a door handle designed in the form of a lion’s head. It has payout ratios of 30, 60, 600, and 6000 and can appear anywhere on the playing field. If 3 scatter symbols appear on the screen at the same time, you get access to the bonus round.

Features of the Immortal Romance slot

Players have a real opportunity to test their own luck in five consecutive bonus games. To open each of them, except for “Wild Passion”, it is necessary that at least 3 scatters appear on the game screen. The rounds open when the player gets access to the bonus mode once again.

The round called “Wild Passion” opens randomly when you’re playing in the basic game mode. In this round, wild symbols occupy from 1 to 5 reels, contributing to the formation of a large number of combinations. Free spins are not available in this round.

The round named after Amber includes 10 free spins at a rate equal to the size of the last bet. All the winnings in this round are automatically multiplied by 5. If at least 3 scatter images appear during the round, the game can be restarted.

The “Troy” round opens after the fifth activation of the bonus game and includes 15 free spins. The image of a bat has the winning ratios of 2, 3, and 6.

The round “Michael” becomes available after you enter the bonus mode 10 times. It consists of 20 free spins with multipliers 2, 3, 4, and 5 in random order.

15 entries in the bonus mode give you access to the round “Sarah”, which consists of 25 free spins.

We are recommended to play the Immortal Romance slot for money. Let’s do it and you will realize that this slot can bring a really big profit.