Kitty Cabana slot is a game, the main characters of which are kitties, spending their holidays in the resort of Copacabana in Brazil. 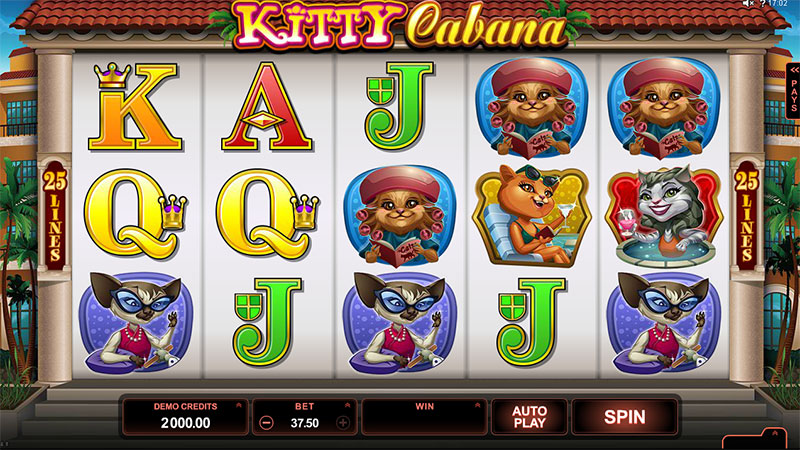 They are sunbathing on a sunny beach, drinking cocktails, and watching the tide. The slot’s excellent graphics, funny animations, and advantageous gameplay options is attractive.

The Kitty Cabana gambling machine has 5 reels and 25 permanently active pay lines. The screen in its idle state accommodates 15 pictures. Among these pictures, there are both ordinary and special ones. During the game, you can get free spins, prize options, and profitable coefficients.

Bet size is the same for all active lines. Per one line, it is allowed to bet up to fifteen coins, costing from 1 penny to £1.5. The total bet per one spin is obtained by adding the bets per each line and can reach £37.5.

Identical regular pictures can form prize combinations, when they are arranged in a row of two, three or more starting from the first column. If the prize combinations are collected on several lines, all rewards will be summed. The size of winnings per one line is calculated by multiplying the bet and the payout ratio for the picture. All multipliers can be found in the payout table; they range from 5 to 500.

Regular and special characters of the slot

Images of pretty kitties are the main distinctive feature of this gambling device. The beautiful cats can be found on beaches, in night discos, beauty salons, behind the bar and in other different places, where you have never seen them before. Besides, there are playing cards from Jack to Ace, which also serve as ordinary symbols in the slot.

The game’s logo is a wild here, and a waitress-kitty is a scatter.

Sсatter is a symbol that is not tied to one active line. It can appear anywhere on the playing field. Payments for prize groups are calculated as usual. Three scatter symbols on the screen trigger free spins. It happens, if you play the Kitty Cabana slot machine for real money. The wild has additional features in free spins, and other prize groups also bring fantastic prizes.

The bonus round begins when three floors of a luxurious resort hotel with five rooms on each floor appear in a new window on the screen. The player must choose one of the rooms. The door on the second floor indicates the number of free spins. The first floor shows an additional multiplier for the round. On the ground floor, you can define additional features of wild symbols:

When choosing a door on the second and third floor, the player sometimes gets an additional attempt. During the free spins round, the bet size and the number of active lines remain unchanged, but the spins are paid for by the online casino. The free spins cannot be prolonged.

In this slot, a player chooses the bet size for the whole spin, instead of betting on separate lines. However, it is possible to choose the number and value of coins per each line.

Clicking on the “Start” button, you trigger the rotation of the reels. And you can immediately stop them by clicking on the same button again. A special option in the customer settings allows you to accelerate the gameplay. The Kitty Cabana slot also has an automatic game mode, where the computer both controls the rotations and puts the prizes into the client’s wallet.

The payout table contains information about the general rules of the game, bonuses, the arrangement of active lines, the payout coefficients of symbols, both regular and special. Another section with reference information reveals other details of the Kitty Cabana slot’s features.