Lucky Koi slot machine gives you the opportunity to immerse yourself in the world of one of the most mysterious Japanese legends. 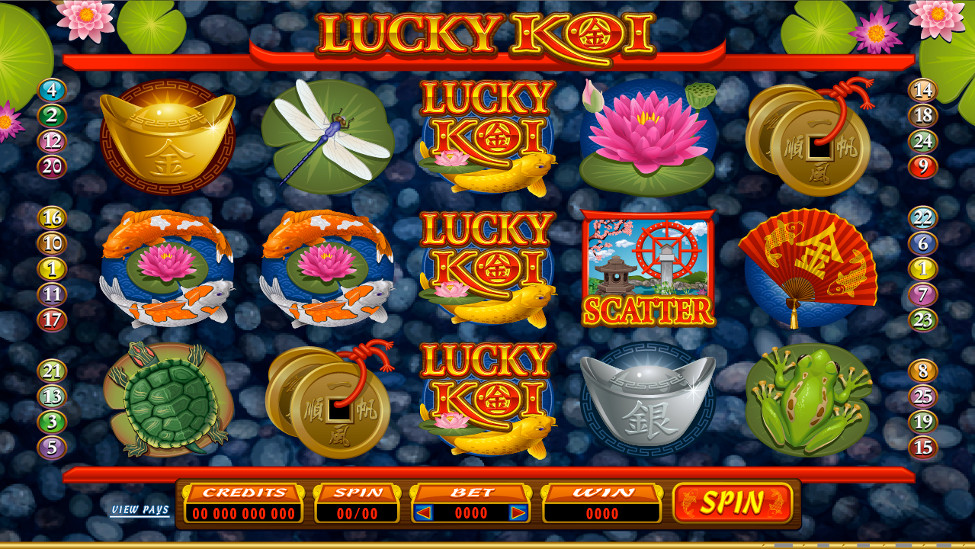 Here you meet the legendary dragon carps, which bring enormous winnings to lucky winners. Developers from the Microgaming studio often refer to the mythology of various countries in search of inspiration for creating new slots. This time they turned their creative eye to the mythology of the Land of the Rising Sun with its legends, interesting features, and vivid characters.

However, they found out that it is too easy for them to refer to Eastern culture as a whole. The developers decided to take one of the most interesting legends, which stirs the minds of the Japanese for hundreds of years. This is a legend about the carp werewolves, which can turn into dragons. This is what inspired the famous team to create the Lucky Koi slot machine.

It is no accident that they chose the carp as the protagonist. Carp is a willful and strong fish that can jump out of the water or swim against the flow. The legend says that those carp, which were able to cross the Yangtze River against the flow, got the ability to turn into dragons. During Japanese festivals, you can often see images of carps and dragons, symbolizing the male principle.

The Lucky Koi slot, built on the grounds of such an interesting legend, has turned out to be very unusual. Nevertheless, it has a classic interface with 5 reels, 25 lines, the AutoPlay function and a lot of pleasure.

So, to change the value of bet per line, you will use the Bet box. The minimum possible bet is 0.01, the maximum is 1. The number of pay lines in the Lucky Koi slot machine is specified in the Lines box. To activate a single rotation, you just need to click the Spin button. If you don’t like to click this button all the time, there is an automatic game mode that starts when you press the AutoPlay button.

To read the rules, as well as to see the payout table, just click on View Pays.

As usual, let’s start from the most desirable symbol on the playing field. It is a true ally of all players, and something that can help to assemble the combination even if the symbols are located at opposite columns of the slot. Of course, we are talking about a wild symbol. In Lucky Koi, the wild is represented in the form of the slot’s logo against a gold background. It can substitute for any symbols on the playing field with the exception of a scatter. Besides, it can form winning combinations on its own. If you’re lucky to collect two, three, four or five such pictures on one active line, get ready to receive prizes with coefficients of 4, 50, 500, and 1000.

Scatter is the second most popular symbol in all modern gaming machines. This picture activates the bonus game and forms combinations in a very lucrative way: it can be anywhere on the reels, not only on the active line. In the Lucky Koi slot machine, the role of a scatter is performed by the image of a Japanese mill with the inscription “scatter”. It activates the bonus round and can also be gathered into a winning combination, similarly to other symbols. In the case of three, four and five such images, the gambling establishment pays 125, 500, and 2500 credits for each coin you bet.

The most valuable of the regular symbols is the picture of two carps, swimming next to each other in the form of a yin-yang symbol. They symbolize both these principles, and also bring wealth to the luckiest players. Coefficients of 2, 50, 200, and 1000 are waiting for players who are able to collect 3, 4, and 5 such images on an active pay line.

Next comes a Japanese medallion, which is one of the basic symbols of the country’s culture. It brings the coefficients of 30, 150, and 250 for 3, 4, and 5 images on an activated pay line.

A Japanese fan and a flower have almost equal profitability of 15, 100, and 200 credits in the first case, or 10, 100, and 200 in the second one. They can be seen on the playing field equally often and bring a great profit to a lucky player.

Three inhabitants of the rivers remain for a dessert. Two of them ‑ a frog and a turtle ‑ have the same profitability. The coefficients of 5, 100, and 200 are waiting for somebody who is able to catch 3, 4, or 5 such pictures on any activated pay line.

The last guest on the reels is a dragonfly. It gives awards with the ratios of 5, 75 and 150. At the same time, the symbol is extremely common, so you can get prizes in almost every rotation.

But the most interesting feature of the Lucky Koi slot machine is the bonus game. When there are three scatter symbols on the screen, the player is offered two options: to catch fish or to receive profitable free spins.

In the first case, each carp caught during fishing will hide a certain reward, which depends on the value of the last bet. And in the second one, the player will receive a random number of free spins in the range from 10 to 30 with the multiplier of x5. Each player must decide for himself whether he will simply catch the carps or choose to play with the x5 multiplier. Regardless of your choice, both options will bring players much profit.