Lucky Leprechaun slot machine will present a lot of fairy-tale adventures in green tones to all players. 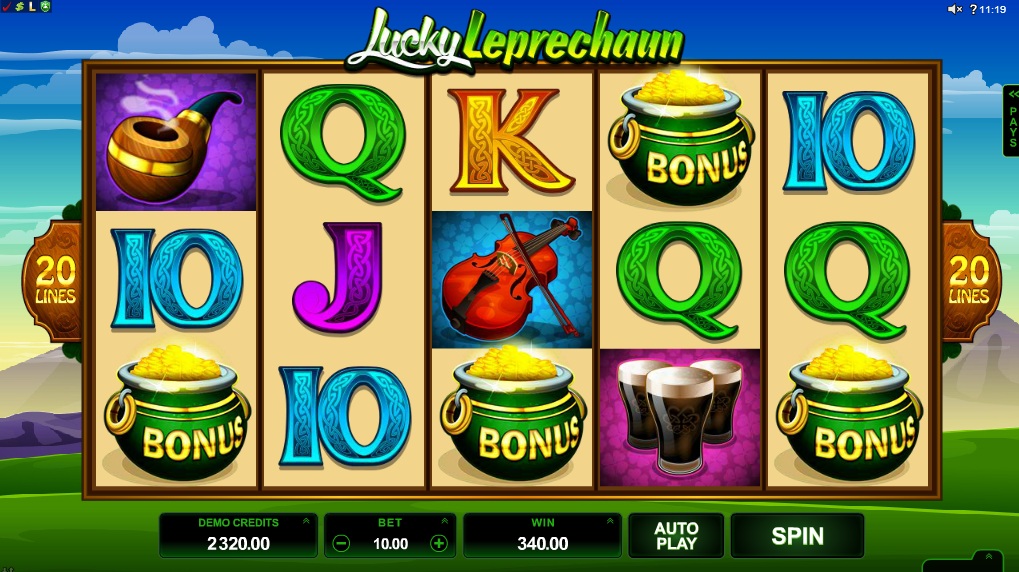 They will all be filled with strong and tasty Irish ale and the good nature of this people. When someone mentions Ireland, we immediately imagine the sounds of violins, fiery dances, gatherings with friends over a mug of ale in the pub, as well as leprechauns, a rainbow, and four-leafed clover.

In the Irish culture, there is something elusively wild and uncontrollable, if this is the right word. Their mythology is filled with faith in luck, and that the Leprechaun gold will help them get rich. They are close to the earth and nature, although may seem a bit rude from outside. However, that impression is deceptive in most cases. The Irish themselves are so simple and straightforward people that you will feel a strong desire to touch their culture and to become a part of it at least for a while.

Lucky Leprechaun slot machine gives you such opportunity. Irish folk music, which serves as a soundtrack to this game, stimulates players to continue the game, demanding not to stop at what has been achieved.

Microgaming has managed to add something really new to the game. Naturally, for this reason playing the Lucky Leprechaun slot machine has turned into an Irish unbridled festival. Each simulator from Microgaming has something that distinguishes it from others gaming machines. But let us keep some order.

In the slot, Ireland is felt literally everywhere. However, the Lucky Leprechaun gaming machine itself looks quite traditional, so that gamblers won’t have to rack their brains over the settings.

The game is played on five reels with 20 pay lines, and the number of them can’t be changed. There is no risk game, but some other interesting features have been added instead.

Ace ‑ three in a row will return your bet tenfold, four will increase the bet 40 times, and in the case of five these symbols your bet will be increased 150 times.

Pipe ‑ we don’t know who first decided that a leprechaun must necessarily have a smoking pipe. Nevertheless, this item is firmly associated with them for many years. 3, 4 or 5 identical pipe images will bring you winnings with coefficients of 15, 100 or 400, respectively.

Ale is a classic Irish drink, and the leprechaun, one of the symbols of Ireland, is also very fond of it. Three glasses of ale will give you 20 times more than you put, four ‑ 150 times and five ‑ 500 times.

Violin can rightfully be called the main musical instrument of the Irishmen. In this game, its image is estimated at 30, 200, or 600 bets for 3, 4, or 5 violins in a row, respectively.

Leprechaun is the main character of the slot machine, who will certainly share his luck with you if he appears on the reels. Three leprechauns will multiply your bet by 60, four by 250, and five by 800.

The logo of the Lucky Leprechaun slot is a Joker, also called the Wild symbol. It replaces all symbols except for the Coin with Clover and the Pot.

Coin with four-leaf clover is a bonus symbol. It appears only on the fifth reel and launches 5 free spins with double payouts for all winnings. Until they’re over, the leprechaun symbol becomes an additional Joker. In addition, clover leaves of two colors can be attached to the lower symbols (from 10 to Ace), rewarding you with bonuses. The green gives you an extra free spin, the gold one adds 1 to the existing payout multiplier. The maximum size of the multiplier is 5x.

Pot of gold is the scatter symbol. If there are three, four, or five scatters on the playing reels, the Path of Fortune round is activated, where you will have 4, 5, or 6 attempts respectively.

Features of the Lucky Leprechaun slot

By rotating the wheel, you learn how many moves you can make along the path. If you get a cell with a rainbow path, you can shorten the way and quickly reach the main prize, which is the leprechaun’s gold. Having met an emerald on the way, you will get an extra attempt.

In general, the Lucky Leprechaun slot machine is so stimulating and positive that you’ll want to play it endlessly. The slot’s Irish folk melody gives you a charge of energy and faith in luck. It’s usually played smoothly, but can be accelerated when the bonus pot appears on the reels. You’re starting to feel like a genuine Irishmen. The atmosphere is so cozy that anyone who wants to relax and win a certain amount of money should try to play this slot.