Lucky Twins slot machine will help you uncover the mystery from the old legend about the little twins who are capable of making people happy. 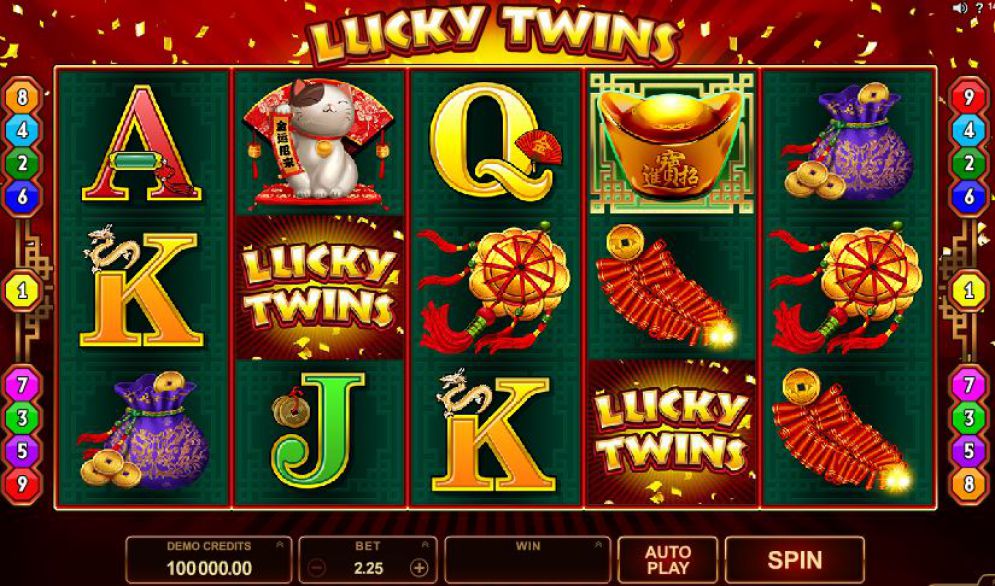 The slot is decorated with bright portraits of these lovely girls, as well as with mystical amulets, gold toys, and chains of prize-winning symbols. Different payout coefficients add thrills and excitement to the plot.

The Lucky Twins slot features five reels and nine horizontal paylines. It is intended to form prize-winning chains and brings prizes to everyone who plays it. You need to activate a certain number of paylines by placing on them bets in the amount between £0.25 and £20. That is, the bet on one reel turnover can be from £0.25 to 180 pounds.

Prizes for base combinations are paid after you have managed to build a chain of two or more similar pictures starting from the first column on the left. The payment amount is calculated by multiplying the bet size by the ratio of the chosen picture. The coefficients, ranging from 5 to 5000, can be found in the payment table. The player will receive the payout for the longest chain of symbols formed on the horizontal payline.

On the playing field of this slot, you will find the game logo, images from the Chinese legend and artifacts of the ancient culture. You can also see numbers or letters on the game cards, stylized according to the basic design.

The auxiliary icons have some special powers. The wild symbol is the twin girls with gold bars, and the scatter is one huge gold bullion.

Wild symbols appear only on three columns in the middle, so they can’t form independent prize groups. They create winning chains in combination with basic elements, due to the ability to replace them. However, the wild cannot replace scatter symbols.

The scatter brings prizes to the user, no matter at what place on the screen it has appeared. The winnings are calculated by multiplying the bet per spin and the element’s prize coefficient: 2, 10, or 50.

Click on the betting window opens a sub-menu, where you can choose the cost and quantity of game credits. The windows with information about the current balance and winnings also have additional tabs. On the control panel, there is a button that starts automatic rotation of the reels. It’s a favorite variant of the game for the players who are always busy. The computer will spin the reels automatically and put the money into the player’s account.

Basic settings allow you to adjust the quality of sounds, graphics, and other parameters. The Spin button activates the reels and stops them.

Features of the Lucky Twins slot

The game’s demo version, which doesn’t require registration of an account, allows you to learn all the features of this gambling machine. The lucky twins are painted with gold bars in their hands. Although these bars are virtual, they are able to give the participants of the game real coins.

In demo mode, you can get enough experience and skills in the game and develop your own strategy. After that, you will be able to choose an online casino for your taste, register your account, make a deposit and run a gambling machine with the story about twins and gold bars.

An example of the Lucky Twins slot game

The next spin has brought us 190 pounds. The account has grown to 2125 pounds.

Under so favorable circumstances, we can safely leave the game.

Lucky Twins slot machine that is dedicated to the generous Twins, will bring you both joy and prosperity.