Max Damage slot machine invites you to take part in the battle with the ubiquitous aliens and it will bring generous victories for the victory over them. 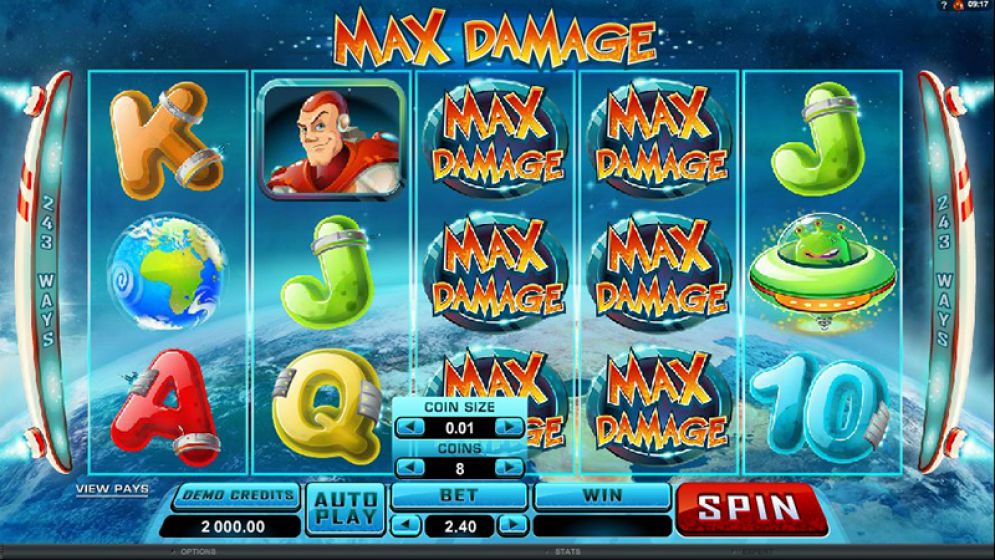 The next creation of the firm Microgaming is the slot machine Max Damage. It tells us a fascinating story about the reflection of the attack of the aliens on Earth.

The design of the Max Damage slot machine corresponds fully to the space theme. The space shuttle is rapidly moving away from the globe along with the five slot drums Maximum Damage. The view of the planet impresses with its beauty, the predominance of the blue color creates the illusion of flying above the clouds. All buttons of the interface are also painted in azure color. Exception is the red key; it leads the drums into motion.

The music that sounds during the game is impregnated with cosmic motifs like the magnificent graphics. You can adjust its volume in the Max Damage slot.

Before you defend the home planet from treacherous aliens, the player will need to determine the size of the bet, which can be from £0.3 to £15.

As for the lines, there are none at all in the described device. Instead, there are 243 different ways in the slot. These ways will allow you to get a winning sequence. As a result of such a feature in the Max Damage gaming machine, it is very easy to play for money. It is easier to collect the harvest of prizes than in traditional devices. For example you will need at least three identical signs for a winning combination. They should be on a number of located drums, not lining up in any line. Of course the chances of a player increase to leave with a tightly stuffed purse significantly.

If you have not yet become an expert in online slots, then do not be lazy to carefully read the game rules and learn the table with the coefficients. Such forethought will save you from annoying trouble during a space trip.

The play for free is cosmically simple in the slot machine Max Damage. There is an automatic game function in the slot, but in general the control is so simple that the child can figure it out.

The signs of the Max Damage slot machine look a bit funny, although they are dedicated to military operations in outer space, as if saying in advance that everything will be fine. The symbols of the slot are starships of blue and red color, the smiling commander of one of these flying vehicles, the playing cards hovering above the planet Earth and the Blue Planet itself.

In addition, there are two signs with special properties: a wild (the logo of the slot machine Max Damage) and a scatter (flying saucer with an alien). A wild symbol turns easily into other signs, in addition to the scatter. This situation facilitates greatly the process of creating winning sequences. In addition a wild in the slot has an unusual opportunity. Instead of one, it covers all the cells of the drum, when it appears. The probability of winning combinations increases dramatically for this reason.

If a brave commander of excitement finds at least two scatters in the playing field at the same time at any point, he will be rewarded with a certain amount of money, and three or more slots logo will activate 15 free rotations. These rotations have the additional ability to double the winnings.

Unfortunately, you cannot buy new free rotations during the free spin, but the developers have prepared an original surprise for the players. While the drums are making free turns, a small battle will take place on the screen. And the whole battle will take place without the participation of the player himself. There will be a picture on the drums with a red starship. It will be successfully destroyed by laser guns located at the corners of the monitor. The lucky guy will earn extra money as a result of the battle, and the destroyed enemy ship will become a wild.

The Max Damage slot machine will appeal to both lovers of space adventures and those, who prefer to travel on the earth’s surface. Interesting storyline, excellent graphics, funny drawn signs attract increased attention immediately.

After all, there are numerous ways of winning victorious combinations, expanding wild symbol, free rotation with the function of doubling and an additional option. They give each player the opportunity not only to earn extra money, but significantly improve their financial status.

You will not become only much richer by protecting the Earth from green men, but also experience the moral satisfaction of defeating the extraterrestrial enemies in the Max Damage slot. You will turn for a while into a superman with incredible power and intelligence!