Pistoleras slot machine will become a new opportunity to implement their victorious emotions and to satisfy the ambitions of gambling masters of any age. 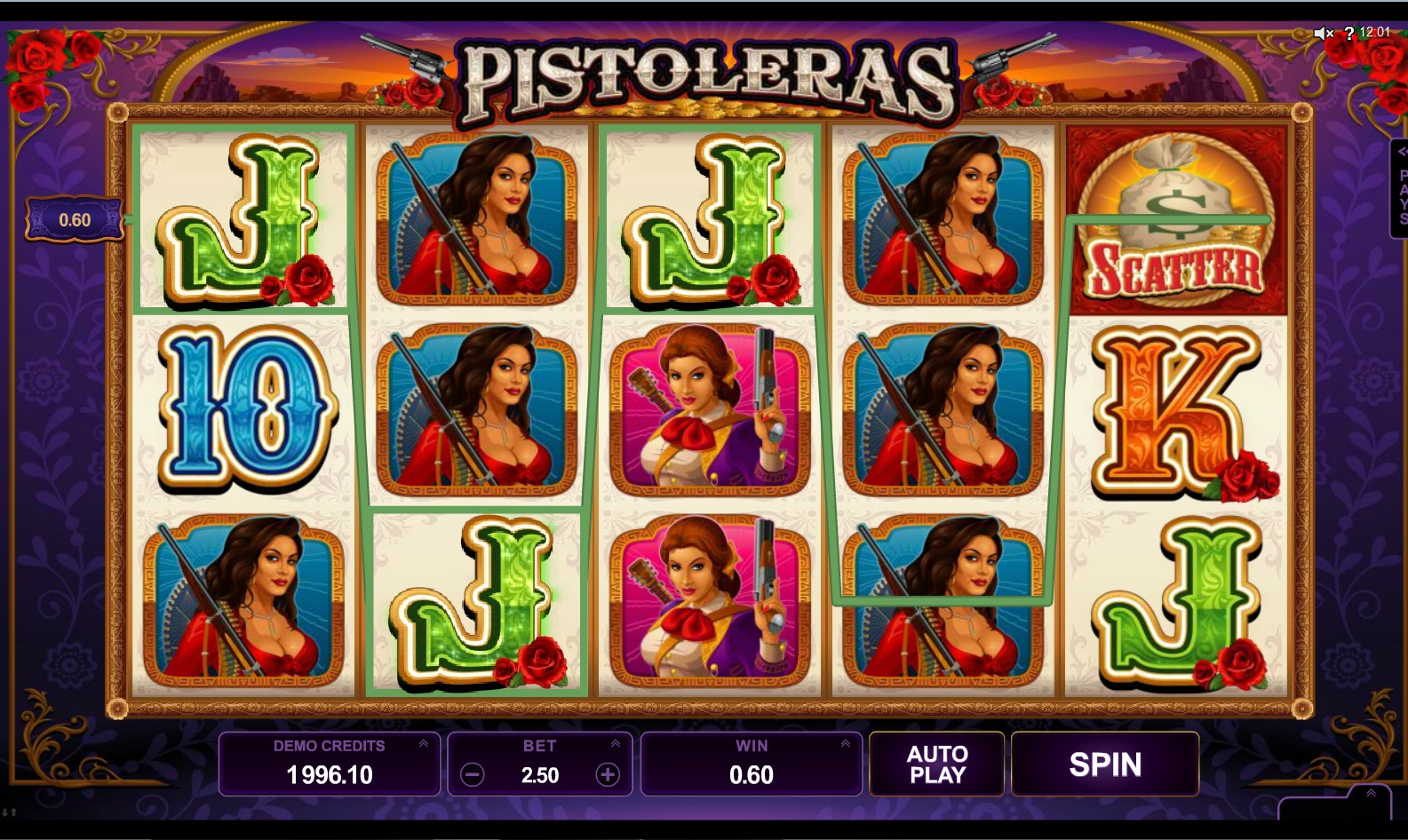 The new Pistoleras gaming machine from Microgaming is performed in the Wild West style. This developer is undoubtedly one of the best. The main characters of the game are female cowboys, who have excellent skills in handling weapons.

The three charming warrior girls will guide gamers to the wonderful world of westerns. It’s no secret that the Wild West was famous for its lack of law and order. The lovely ladies offer each player to get a significant sum of money. The bandit girls will involve the game participant into a real fight, and there’s no way to avoid shooting, chasing, and robberies.

The slot’s graphical design is astonishingly bright. The perfect arrangement of its decoration is really amazing. The action on the screen takes place against the background of a sunset, so the sky is painted in orange color. Of course, the special attention of players will be attracted by charming robber girls, who have occupied the reels as icons. These beauties hold weapons in their hands, which makes them even pretty. In addition, the slot has a soundtrack that fully corresponds to the theme of the Wild West, this adds even more realism to the gameplay.

The slot machine has five reels and 25 pay lines. The number of pay lines is one of the most important differences from standard slot machines, and the lines cannot be deactivated. The symbols on the playing field are arranged in three rows.

First of all, you need to start the game by pressing the “Spin/Stop” key, the stop of the reels is performed by the same button. When you click the “AutoPlay” button, the reels are launched in automatic mode. The “Bet” key helps you to select a value for your bets, and the “Bet Max” allows you to set the maximum value.

The “Coins” key adjusts the number of coins for betting per line. By clicking on the “Coins Size” button, the player is able to set the nominal value of the coin. One of the most important keys is “Pays”, which provides information about winnings in the form of tables. To see the current state of the game account, use the “Credits” key. The size of winnings for one spin can be found by clicking on Win.

Playing the Pistoleras slot for real money is very profitable, due to its unique features. For example, the slot has free spins. In addition, there is an exciting bonus game, where you can get significant winnings for correctly opened targets.

Each of the 12 targets hides either a certain number of credits or nothing. In case of an error, the player returns to the main mode. In the event of a positive outcome, your account is increased several times.

The player will get the biggest win, if there is a coincidence of three symbols with the Pistoleras logo or a pair of crossed pistols. Bonus mode is started, when a coin bag appears on the screen, which is the main scatter, and the image of a trailer is an additional scatter in this machine.

The player will be able to pamper himself with additional prizes, if he gets at least three sсatters. The trailer image will provide 15, 20, 25 free spins for combinations of 3, 4, 5 icons. The main scatter symbol triggers a bonus game and gives you the opportunity to obtain £110000.

The game is designed for the most courageous and persistent players, because not everyone is able to survive the breathtaking dynamics of the gameplay. Such an adventure will impress every player, who has managed to increase his own capital. The Pistoleras slot machine can be played for free, which is not boring at all, due to the huge amount of emotions and adrenaline that you get.

The charming robber girls, hiding revolvers and rifles under their skirts, will make players richer. If there are five pictures with girls on one line, the player will receive a reward:

A wild symbol of this slot is the image of a trailer. The player can get a win, if there are three pictures on the playing field.

Free mode of the game

In case the player wants to familiarize himself with the basic rules of the game, it is best to play the Pistoleras slot machine in free mode.

If you like thrills, then the Pistoleras slot is what you need, it’s a really hot game waiting for you. This slot is included in the number of gaming machines with the highest coefficient of return to player, which is equal to 98.7%. We hope that this information will help interested people to pay attention to the fascinating and rather generous slot. The profit from lots of winning combinations will provide you with a storm of positive emotions.