Rabbit in the Hat slot

Rabbit In The Hat slot allows players to completely immerse themselves into the world of magic and tricks. 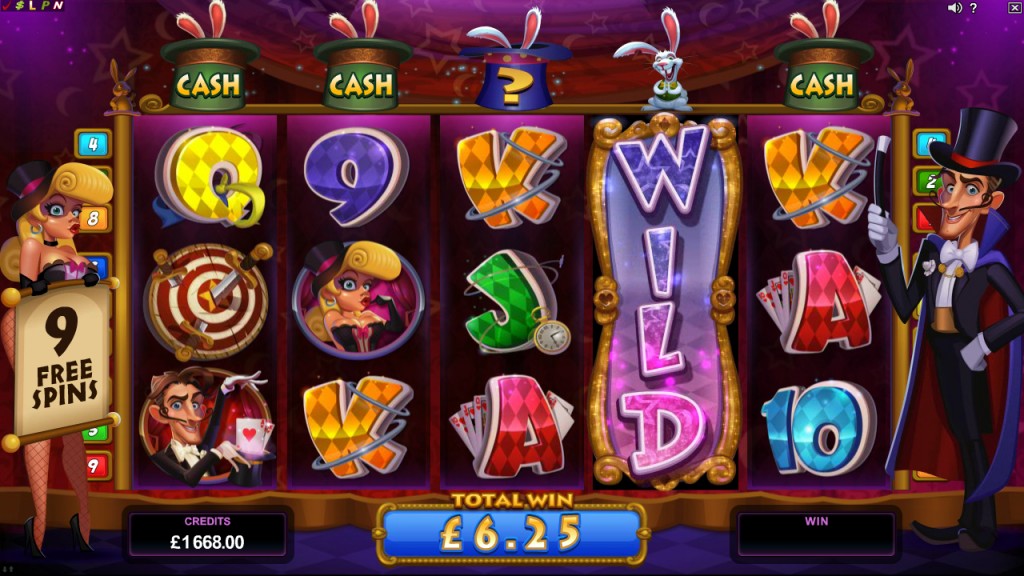 You must have seen the exciting spectacular performances, when a magician pulls a rabbit out of an absolutely empty hat. As a rule, this brings audience to absolute delight. However, this is not a miracle, but only the skill of the magician and the dexterity of his hands.

The Rabbit In The Hat slot invites everyone to try on the role of a magician. The only difference is that the hat will be replaced by your computer and instead of a rabbit, you’ll get cash rewards.

The emulator consists of 5-reels and 9 lines for betting. In this game, you need to activate all 9 lines, placing at least a minimum bet on each of them. The player doesn’t have an opportunity to choose a smaller number of lines, but the cost of bets is quite affordable for literally all players. Bet per round may be from £0.01 to £18. The bets are always the same for all pay lines (the total amount is divided into 9 identical parts).

Below the main screen, there are several buttons that you can use to control the gameplay:

You can play the Rabbit in the Hat slot for free. This opportunity is provided to the player by a demo version of the gambling machine. Real money will be replaced by virtual coins, but the gameplay is 100% identical to the game with real bets. The player gets the opportunity to hunt for prizes and adrenaline without risk.

Symbols that can form prize combinations

Winning combinations are arranged in a line, starting from the first reel. To receive the desired cash reward, you need to gather a sequence of 2 or more identical symbols.

The slot machine’s subject is devoted to the art of illusionists. On the screen, there periodically appears the magician himself, his assistant, a cylinder hat, a target for throwing daggers, and so on.

Symbols that can form prize-winning combinations are:

In this game, there is no scatter symbol, but the player still can get bonus rotations.

In Rabbit Hat, the manufacturer provided a very interesting bonus round. Above one of the reels, there appears a magic hat, which changes its position after each new spin. If there is the wild symbol under the cylinder, then the player will receive one of the following possible prizes:

This bonus game is the main distinctive feature of the Rabbit In The Hat slot.

Now you can evaluate all the possibilities of the slot, both on the main game mode and in the bonus round. All players without exception are guaranteed to receive an exciting adventure.