Reel Gems slot machine is able to create a real miracle on your computer screen. 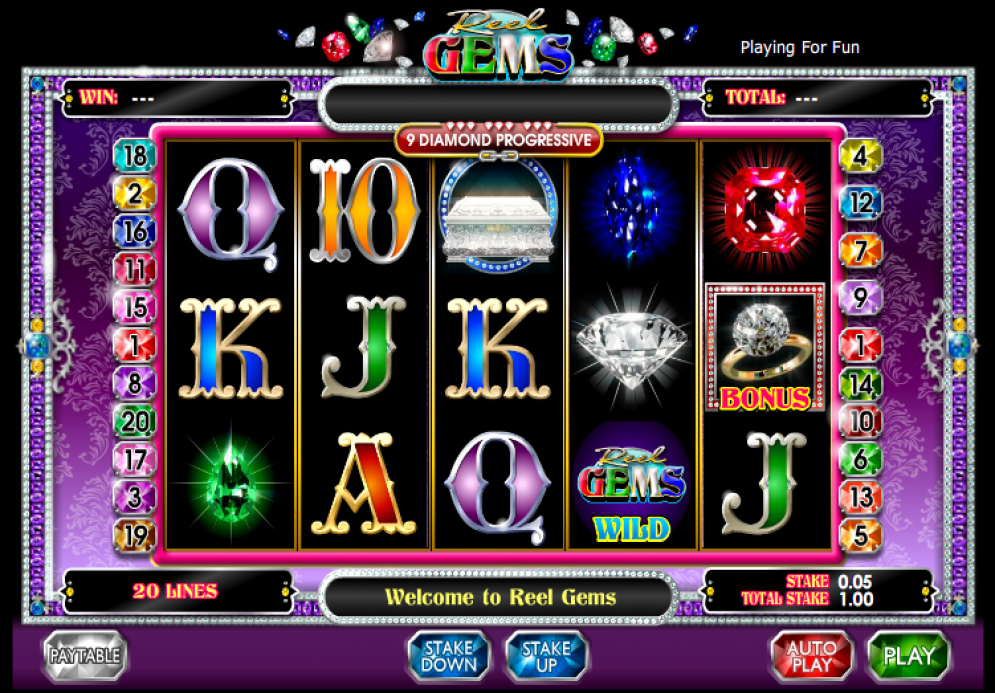 Its nice design and unique “Respin” feature will make the game process literally breathtaking. This slot is considered to be one of the brightest and most colorful slot machines. Its distinctive feature is the variety of precious stones that can bring large prizes. Any gambler will be fascinated by the game because of its splendid gems, and the desire to get them will only strengthen his will to win.

The game panel of the slot is decorated in noble dark shades, and the sparkling diamonds of different value, size, and cut are placed against their background. They not only look admirable, but also bring generous rewards to the players.

Developers of the Reel Gems slot have developed 243 ways to get significant payments (some of them can reach 40000 credits). In addition, the slot has a unique Respin function, the essence of which is the possibility to buy additional spins. Thus, the game provides its users with positive emotions, significant winnings, and colorful memories.

A couple of words about technical characteristics of the Reel Gems slot machine:

It should be noted that the design of the slot machine is rather laconic and effective. Every detail is in its place, which makes the game interface even more convenient to use. The gemstones are framed with dark blue satin rims and shaded with a black background. Such a combination of bright, sparkling shades of stones with traditional background colors makes the gems even more realistic for players.

Another factor that attracts players is the slot’s unique balance. The development team applied this property to the entire design of the video slot, especially with regard to animation. After all, sometimes it happens that a manufacturer, having a large and accessible base of animation effects, gets carried away by the process and create a slot that looks more like an RPG than a gaming machine for online casinos.

The Reel Gems slot machine is designed with restraint and elegance, so playing it can bring you aesthetic pleasure: all movements of symbols, fountains of diamonds, and the overall game dynamics form a consistent picture. The musical design of the slot can be considered as its zest. The easy and unobtrusive melody of the piano with dynamic splashes of vivid sounds perfectly adjusts the player to the gameplay.

As for the interface, even the control panel of the slot resembles jewels. Each key performs a specific function, for example:

There are also some informational windows, such as:

Like any other gaming machine, the Reel Gems slot also has its own unique symbols. These include:

After each spin, the user has the opportunity to change the unsuccessful combinations that appear on the game line. At the bottom of the Reel Gems slot screen, there is a key that launches the Respin function.

However, it should be noted that the player pays from his own account for each additional spin. The cost of respin is shown on the panel below the reels.