Robo Jack slot is a variation of gaming machines about funny mechanical robots. 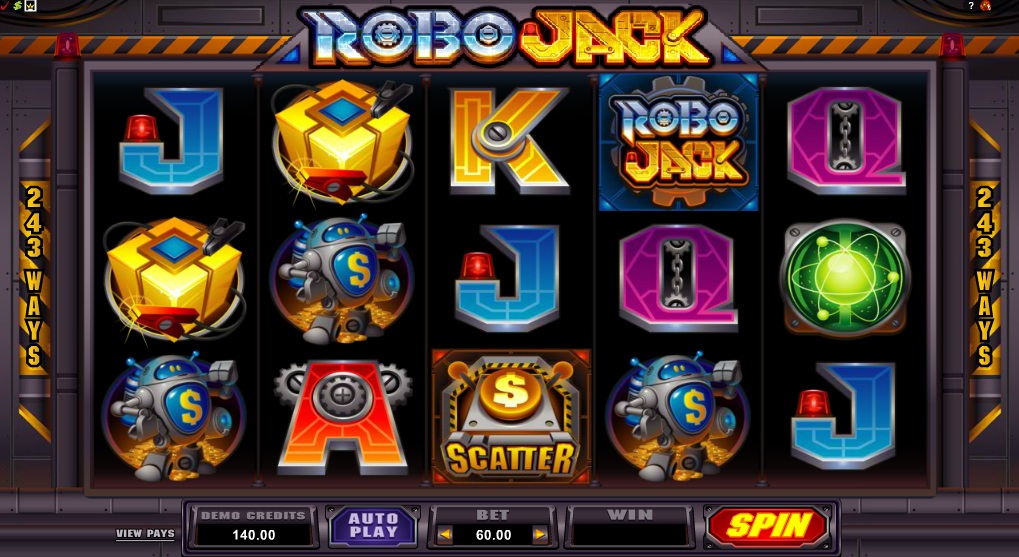 This emulator has a several variants of bonus rounds, free spins, special symbols, and high payout ratios. The friendly robots will provide you with a good mood and great rewards.

Five reels of this video slot ensure a very interesting and profitable gameplay. 243 variants of prize combinations and high payout ratios for images of robots of different colors and shapes are able to attract anyone, who loves new technologies and gambling.

Both beginners and experienced players can play the Robo Jack slot for free, as it’s convenient and fun. Beginners can safely click on all available buttons, make all kinds of bets, and change various settings.

On the icons of the slot machine, you will find amusing robots that are capable of performing various unexpected actions and can bring prizes to players. The fun design and great music together with several variants of bonus rounds are the main advantages of this slot. In the bonus rounds, different types of the robots are involved. They have special functions that aren’t similar to what others do. Other cells of the slot’s reels are occupied by card symbols with smaller payout ratios.

The role of a wild symbol in this gambling emulator is played by the game’s logo. It has the ability to supplement prize chains composed of basic pictures. The only icon that can’t be replaced by wilds is a scatter symbol.

A combination consisting of two to five scatters gives up to 100 total bets to the player. Money is immediately credited to the account of the user. More than two scatter symbols will trigger a set of eight free spins. During the spins, which are performed at the expense of the casino, an additional wild symbol will be activated.

The special bonus pictures can also activate free rotations, if the Robo Jack slot machine is played for real money.

In this round, there are five different robots with special functions. At the very beginning, a new window will be opened, where you can see five capsules with different robots. By default, the first robot will act first. However, you have the right to choose another one of the five proposed. In these rotations, special wild symbols will participate, which can expand, occupying a whole column, as well as increase payments and give a good mood to the player. The sets of free spins are able to resume and can make up to 65 spins in total.

There’s another robot in the slot that can triple prizes in the bonus round. In total, there are as much as 243 prize options. They are all listed in the payout table, which should be examined, before you press the “Start” key. A large number of prizes will make you happier and improve your financial situation. In the most fortunate case, you can get a static Jackpot, which can reach up to 90000 bets.

The screen of the Robo Jack slot is painted in dark colors. It looks like, if the robots are in a dark bunker, where they are engaged in stamping gold coins, which sometimes go to gamers.

The robots rotate five reels with 243 possible prize chains. Players can bet from one to ten coins ranging in price from one penny to 25 pence.

The total bet size can be from three pence to 75 pounds sterling. Maximum prize is 75000 bets. The jackpot is a little higher.

The wild symbol is represented by the game’s logo. The scatter looks like a device with a gold dollar sign. Bonus rounds with additional features have several versions.

Slot’s theoretical return to the player rate is: 95.7%.

Images of a green sign, a yellow gift box, and a chest full of gold will give the player from 100 to 2500 coins.

The robot with a dollar sign on its chest is capable of giving you an amount from 250 to 3125 current bets.

The scatter can bring up to 7500 bets. After receiving three scatters on the screen, you will see the inscription BONUS and one of the five selected variants of the Bonus round will be launched.

You can learn the slot’s control buttons without having to register an account:

When you learn all the keys and understand the slot’s algorithms, it’s time to switch to the real money game. To do this, choose an online casino, fill out the form, make a deposit, and open the page with this fascinating video slot.