Rugby Star slot machine, as its name suggests, is dedicated to rugby, which is a very interesting sport. 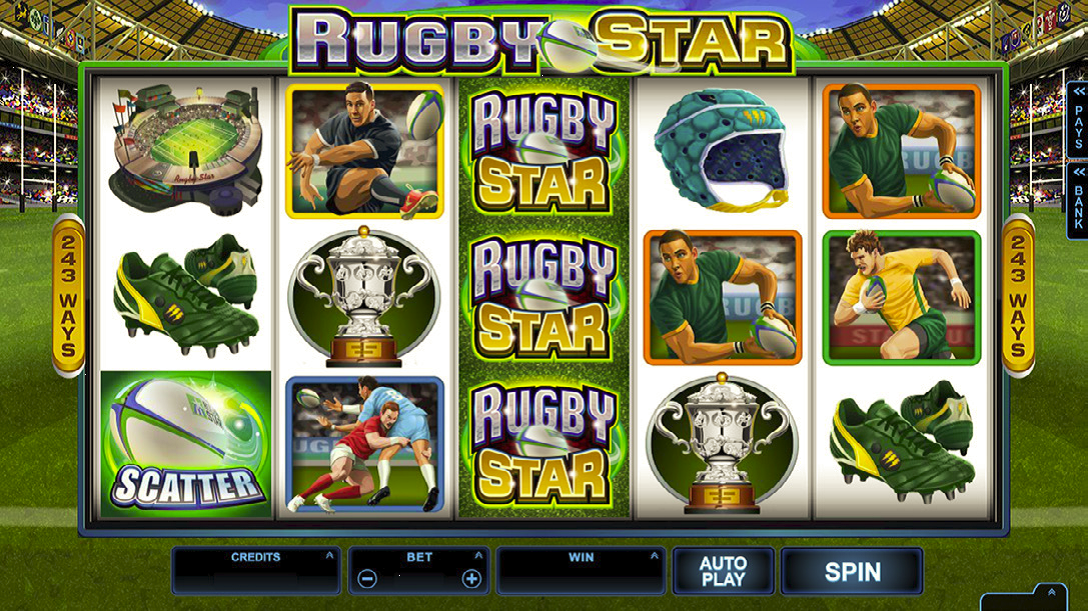 The slot has five reels without traditional active lines and offers 243 prizes to everyone who decides to take part in the gambling competition.

There are no usual horizontal lines in the slot, a bet, which is always a multiple of 50, is made per one spin. The bet per spin will be from £0.5 to £50.

On the slot’s screen, you will see ordinary and special pictures that revolve on the reels. Ordinary symbols, lining up on adjacent reels in a row of three, four and five pieces starting from the left, form a prize combination. The player receives prizes for the longest of the combinations. Its amount is calculated by multiplying the bet by the coefficient of the picture according to the winnings table.

If you receive several prizes in one move, the winnings are summed up and transferred to your account. Doubling of prizes is not available in the Rugby Star slot, because there is no game of chance.

The Microgaming team, as usual, has created a gambling machine with excellent graphics. The athletes on the icons of the reels are depicted with photographic precision. Artists have captured the athletes at different moments of a real rugby game. On the slot’s screen, you can also see various sports equipment items and stadiums filled with fans. The soundtrack creates a realistic atmosphere of athletic competition for the online casino users.

Among the symbols of the Rugby Star slot, there is a wild that looks like the game’s logo and a scatter in the form of an oval ball for rugby.

The wild symbol appears on the middle part of the screen and can occupy the entire column, thus creating prize chains. It has the ability to replace any pictures except scatters. In some spins, two columns can be completely filled with the wild symbols.

The scatter brings rewards regardless of its location since it is not attached to any of reels or lines. A picture of three oval balls triggers free spins (15, 20, 25 free rotations), it appears if you play in the Rugby Star slot machine for real money.

In addition, during the free spins, the special option of Rolling Reels is active. The availability of this original option ensures the possibility to get many bonus combinations in a row. This special function works and looks like this: the previously formed prize group explodes directly in front of the player, and a new group of images falls into place of the exploded one. This process can take quite a long time.

During the free spins, additional multipliers of up to 10 are also added to the game. All detailed information can be found in the help section.

If you click on the window, where the bet is placed, a special sub-menu will be opened. Here, you can specify the number of coins and their value. This is the way to set the size of the bet per spin.

By clicking on the “Spin” button, you can launch a single rotation of the reels. During the rotation, another one with the inscription “Stop” will replace this button. Clicking on it, you can stop the rotation at any moment that is convenient for you.

The Rugby Star slot has a function of automatic rotation. It is designed for the convenience of the players, who are often too busy. It is very convenient to turn on the auto-rotation of reels and to watch the process without touching the keys. The computer will rotate the reels without anybody’s help and send the winnings to the player’s account. And you will be able to enjoy the game, watching how the slot’s bright pictures move on the screen. The “AutoPlay” mode also has certain settings. You can specify a number of spins and the time for stopping the reels.

There also are buttons for adjusting the quality of sounds and images, as well as the speed of the gameplay, and the button that opens the payment table and the section with general rules. If you want to know more details, you can access the help section that hidden under another button. As a rule, it is located at the bottom left of the screen and is indicated by a small letter “i”.

When you learn all the secrets of the slot in its free version, it’s time to switch to the real mode. Having chosen a gambling club, you should register an account, make a deposit and get excellent prizes in the Rugby Star slot machine!