Secret Admirer slot machine tells about the man, who is secretly in love with a beautiful girl. 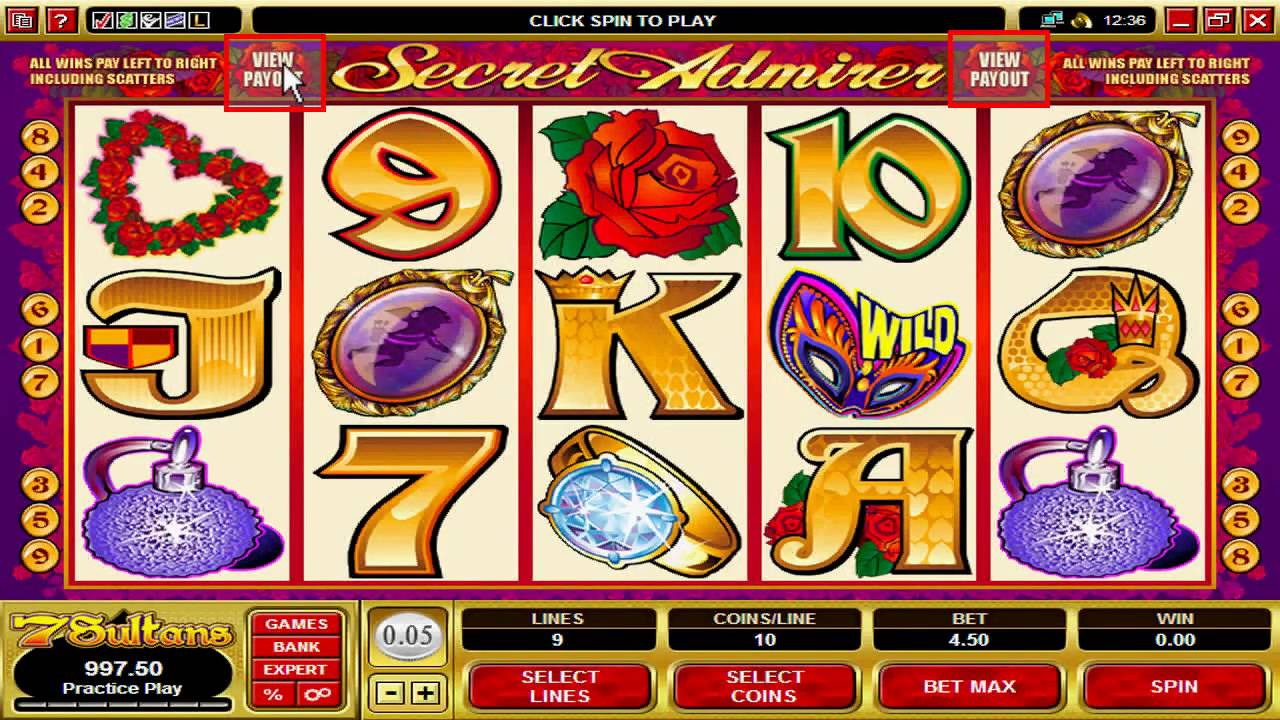 Microgaming professionally treated the secret courtship with wonderful graphics and voice acting, offering advantageous payouts for those, who are not afraid to show perseverance.

On the five reels with nine horizontal lines, you will find icons with red wonderful roses, rings, and large diamonds. You will see hearts, pendants, and other items that are all gifts from the secret admirer.

You can bet from one penny to 10 pounds for each of the 9 active lines. Thus, the maximum bet per spin is 90 pounds. Special symbols and free spins make the story even more exciting.

Most pictures form prize combinations, when three or more of them appear on the active line. They must necessarily be arranged in a row, starting from the leftmost column. However, this emulator also has icons that bring a win, even when there are 1 or 2 of them. The amount of payment is equal to the product of the bet per line by the coefficient from the payout table. The maximum multiplier is 5000. The scatter symbols in the Secret Admirer slot form combinations in a special way. Prize payments from several pay lines are summed up.

If the player isn’t satisfied with the current prize, it can be easily increased several times. For this purpose, the gambling emulator offers to play in a risk round. This round is activated immediately after a successful move in the standard mode. This opens a new window, where the player should guess the color of the proposed playing card. If the answer is correct, the win is doubled. This can be performed several times in a row. In the case of an error, the current prize will be canceled.

Icons of the slot’s reels are decorated with love notes, roses, pendants, perfumes, hearts of flowers, and playing cards.

The image of a masquerade mask is a wild symbol, which produces combinations with the maximum coefficients. This picture supplements winning combinations and replaces other pictures, except for the scatter. Thus, it helps to form longer prize chains with greater payments.

The golden ring with a large diamond serves as a scatter. The payments for the scatter are  2, 6, 20, 50 total amounts of bet per spin. These are credited for: two, three, four, and five rings.

Playing the Secret Admirer slot machine for real money, you have a chance to get three free spins at the last bet. During these spins, all the scatters will remain on the reels. All symbols of diamond rings bring prizes regardless of their location on lines or columns. When a new picture of the ring appears on the screen, the player gets three more free spins. You can have up to five scatters on your screen. In this situation, the player will receive the maximum reward within the next 3 spins.

The thematic bonus rounds and the cumulative Jackpot are not implemented in this gambling machine.

Features of the Secret Admirer slot

Automatic spins, accelerated reels, adjustment of sounds and viewing of statistics of the game’s last sessions become available, when the expert mode is enabled.

The Secret Admirer slot machine can be played for free using virtual credits. Beginners can take advantage of this to gain experience, learn all the navigation keys, and develop their own game tactics. Players, who already have a lot of experience in online games, can use the demo mode just for fun. It’s very pleasant to get fantastic prizes, even if they are in virtual money.

Thus, we earned 310 pounds in a few minutes.

If the first few spins with the smallest bet were unsuccessful, there is no point in continuing to play the same way. Instead, try to increase the bet to the maximum possible value and to activate additional horizontal pay lines. In many cases, it helps to bring luck to your side. This will make prize payments more frequent and significant.