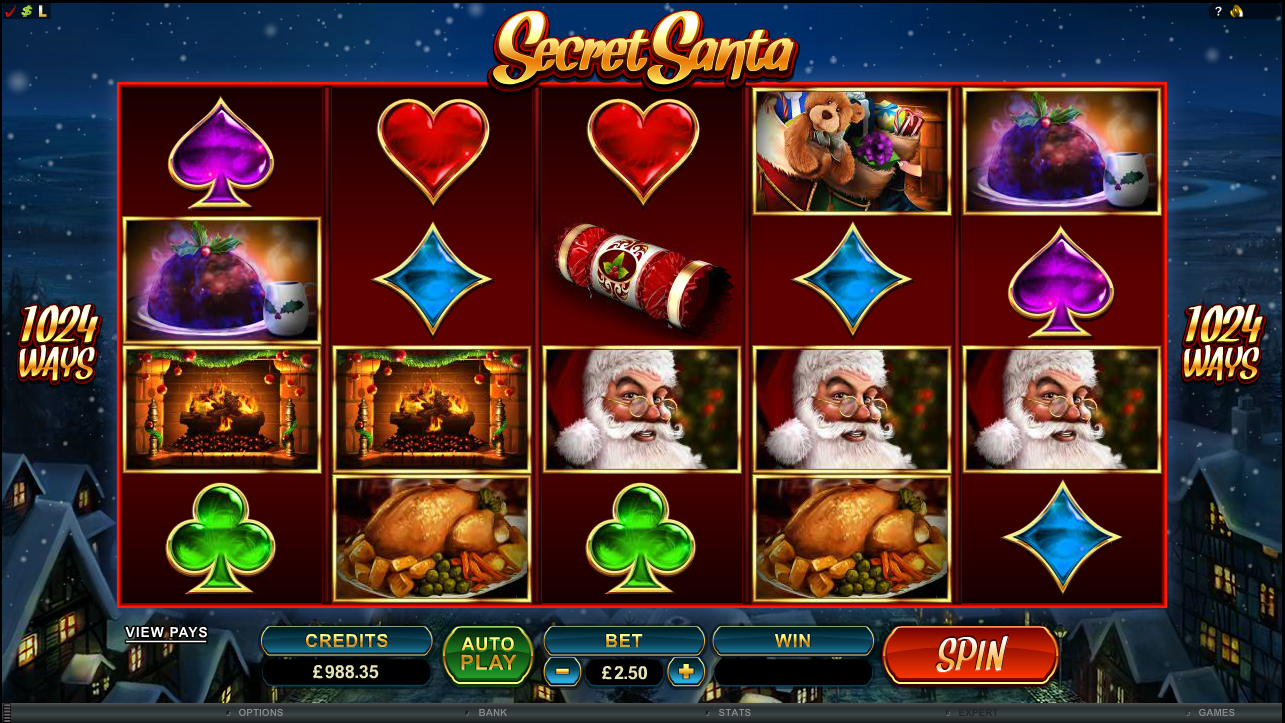 Microgaming is one of the leaders in the development of a variety of slots, and the team doesn’t like to create gaming machines of the same type. If we look at all of their products, we can hardly find two completely identical slots, where only decorations are different.

The Secret Santa slot is distinguished by an unusual Christmas theme. At first glance, the slot belongs to the category of ordinary gaming machines dedicated to holidays. If you look closer, you can find not only an extremely cozy slot, but also the perfect opportunity to earn good money.

It’s quite an unusual slot. It features 5 reels and an enormous number of pay lines. As stated by the developer, there are 1024 of them. You can’t change their number, but you shouldn’t think that the value of one bet is extremely high. You’ll only have to pay for 50 lines.

The “Bet” button changes the value of one single bet. For those who want to immediately start playing with large bets, there is the “Bet Max” button, which allows you to place the maximum possible bet in one move.

The “Spin” button is responsible for a single rotation. Those who do not want to press it constantly can set up an automatic game mode. It allows playing the Secret Santa slot machine for real money, spinning the reels without the help of the player. You can specify a certain number of spins by selecting from the drop-down list. Otherwise, the reels will rotate until you stop them manually.

A “View Pays” key is intended for those, who want to see the game rules and the payments table.

Features of the Secret Santa slot

The image with the Secret Santa inscription on a green background acts as a wild symbol in the slot machine. It replaces any symbols in winning combinations with the exception of a scatter. It also brings high payout ratios: 750, 2000, or 8000, if there are three, four and five such images on any active line.

An image of firecracker acts as a scatter. Scatter symbols can form winning combinations outside active pay lines. Coefficients of 1000, 5000, and 50000 are waiting for those players, who can collect 3, 4, and 5 such images on the screen.

The image of Santa is the most expensive of regular pictures. The generous old man brings lucky players valuable gifts in the form of coefficients of 500, 1000, and 5000 for three, four and five pictures on one line.

A Christmas tree with gifts is the next symbol in terms of profitability. It emerges on the pay lines quite frequently and brings very significant prizes. Lucky players can get 400, 750, and 4000 bets for 3, 4 and 5 images on a line.

A Christmas fireplace is an essential attribute of the holiday. In front of a fireplace, people usually spend their family festive evening. But it’s not only a cozy place, you can also find a good profit near the fireplace: those players, who are able to collect 3, 4 or 5 fireplace images on one active pay line will get wins with ratios of 250, 500, and 2000.

Bags with gifts are as attractive as a fireplace, but they bring a little less return. Having collected three, four or five bags on one pay line, you can obtain prizes with coefficients of 200, 400, and 2000.

How can Christmas be without a family dinner? Secret Santa slot allows you to play for free, just for fun. The image of roast turkey brings coefficients of 150, 300, and 1000 for three, four, and five pictures on one active line.

A pudding is another necessary attribute of Christmas. A lucky player, who will be able to catch three, four, and five such puddings on the same line will receive the coefficients of 100, 250, and 1000.

The conventional card symbols are not so profitable, but they are much more common. The Secret Santa gaming machine uses only card suits.

Despite the fact that the coefficients of all the symbols are quite large, you should know that the winning combinations can appear on 3-4 lines at the same time. This will increase the winnings several times, so that all coefficients can be multiplied by 2 or even 3.

Special rules of the slot machine

Despite the fact that Secret Santa has no bonus game in its pure form, there are a few special rules that won’t leave the gamblers indifferent.

The most interesting of all the rules is 5 of a kind. It allows you, after receiving a series of 5 characters, to replace these characters with others. Thus, it gives you the opportunity to reassemble the winning combination using other symbols.

Thanks to this rule, after the appearance of 5 identical symbols on one line, the round will not end with the win of a single combination, allowing the lucky player to break the real jackpot in one spin.

In addition, seven different gifts can be activated randomly during the game:

Having chosen one of these seven gifts, you can really break the jackpot with the Secret Santa slot machine.