So Much Candy slot

So Much Candy slot machine attracts users’ attention with its bright appearance. 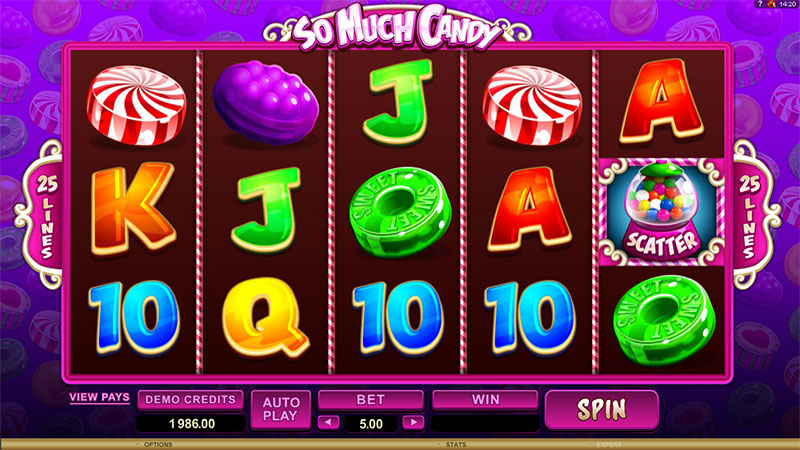 Even the name of the slot assumes that the bright juicy candies will shine on the screen as the main characters. Microgaming continues to pamper players with their novelties, and each slot is perfect in every sense. The image and musical effects have a very high level of quality, the adrenaline rush makes you crazy, and the return rate exceeds expectations. The So Much series consists of several emulators and each of them, including the Candy, fully corresponds to the highest standards of the manufacturer. The sweet adventure is guaranteed to everyone who joins to the event.

The So Much Candy slot machine is designed in classical style: in front of the player, there is a playing field with 5 reels. There are as many as 25 lines, and the player does not have the right to change their number. All 25 lines are involved in each round, that is, the bets will be made on each of them. The bets range varies from 1 to 10 coins, and the coin value is determined by the player at the very beginning when making the basic settings. One coin can cost 0.01, 0.02, 0.05, 0.10, or 0.2 pounds.

The So Much Candy slot is interesting due to various types of symbols, including splitting and special ones. The machine has a number of functions that help the user to assemble winning combinations. There is also the possibility of getting free spins as part of a bonus round.

The purpose of the game in the slot is quite common: you need to get winning combinations, which are chains of identical images. They must be arranged continuously on one of the lines, the counting is carried out from left to right starting from the first reel. If you have received several combinations at the same time, the prize amounts are not summed up: it’s the result of the highest sequence that is credited to the player’s account. The size is calculated according to the coefficient of the picture that can be found in the payout table.

In the table, you’ll find detailed and well-structured information on each possible combination of symbols. The maximum multiplier is 16000, and the fantastic sum that results from multiplying is quite comparable to a jackpot, so there’s plenty to fight for.

The slot doesn’t have a risk game, due to which you can increase the winning 2 times. All prize money is immediately credited to the main account, but the So Much Candy slot still has the AutoSpin function.

This feature allows you to make settings once, and then you will only have to watch the game progress. The system itself will make bets, withdrawals, and transfers of funds. The only shortcoming of the automatic mode is its rapidity. If the game suddenly goes wrong, and the initial bet was set to the maximum, your account will quickly become empty.

You can also play the So Much Candy slot for free: the demo mode doesn’t have many differences from the real one. You will receive the same bonuses, opportunities, and emotions without the need to register and confirm your account. However, you won’t be able to withdraw the money you won: you need to replenish your account to make it active.

The icons on the playing field of the machine are quite predictable. They include colored lollipops of different shapes, as well as letters and numbers of playing cards, performed in the same style. The lollipops have the ability to split into several elements from (2 to 5). This occurs immediately after the reels are stopped. Due to this feature, prize combinations can include up to 25 symbols as a single sequence.

There are also special symbols with some extra features that are intended to support the player:

The So Much Candy slot machine is unique, due to its splitting symbols and additional features that are available during the bonus round. Choosing a gambling establishment, pay attention to its reputation and customer feedback. There have never been cases when the client was dissatisfied with the game itself. A lot of vivid emotions in combination with pleasant rewards are available to all fans of gambling.