Stash of the Titans slot

Stash of the Titans slot machine affords the opportunity to solving the mysterious puzzles of the best ancient Greek minds and receive their divine reward. 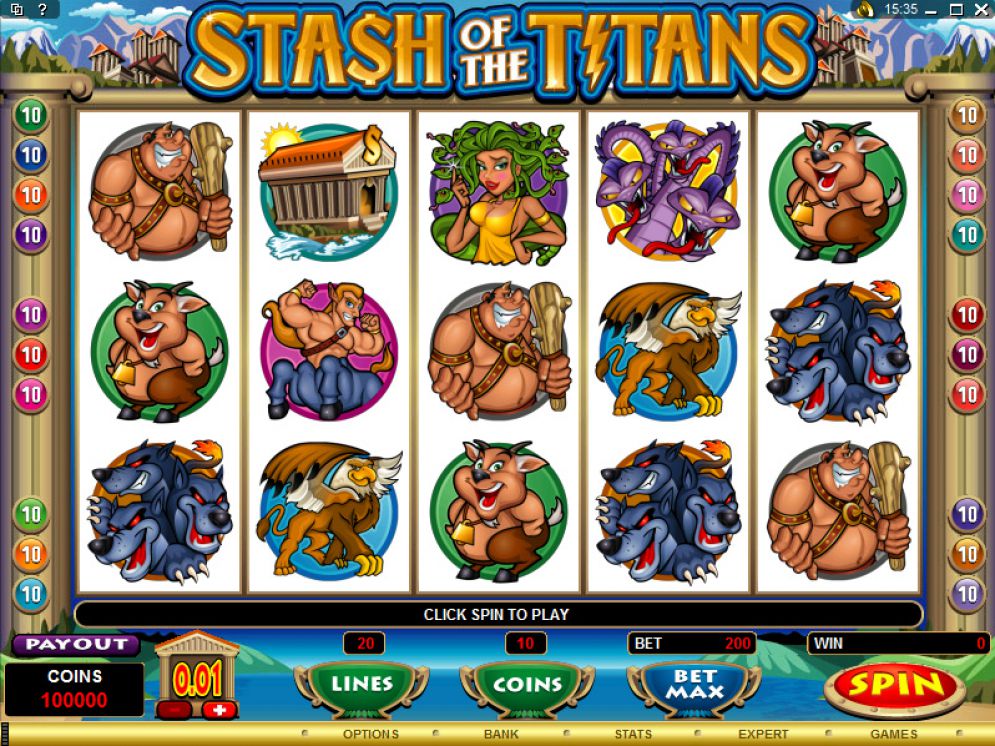 Ancient myths do not lose their relevance to this day. Greeks and Romans, who lived for many centuries to the present day, are also all interesting to all lovers of history. It breathes romanticism and something that we’ve lost. There are the exploits of Heracles, the Tower of Babel, the labyrinth of the Minotaur. Who can say that he never read about them and did not experience all the adventures with the heroes? Although there may be people who have never heard of them, but we want to believe that they will certainly take the opportunity to learn more.

Maybe that’s why the developers from the company Microgaming decided once again to remind us of the long gone heroes. The creators of the slots came up to the task with all the inherent originality.

Stash of the Titans slot machine is a passionate emulator. It is made with humor and beautiful design. A truly fun music and humor animation will appeal to all fans of nonstandard slot machines. Here are collected the most popular and recognizable mythological creatures and heroes, which we have met repeatedly in books or films.

The interface is extremely simple: 20 lines, the number of which does not change, bet which is configured by the player, no risk game. But what are the game symbols themselfs! It’s impossible not to smile during playing this slot machine.

Satyr symbolizes entertainment and debauchery. He is the god of wine and fun. It’s easy to play for money and to catch pleasure in the slot machine Stash of the Titans. A combination of 3, 4 or 5 horns in a row will bring you 4, 10 or 20 bets respectively.

Cerberus is the three headed guard of the kingdom of the dead. Three identical consecutive multiply your bet by 5, four by 15, and five by 30.

Centaur is a mythical semihuman and semihorse. It will reward you in the amount of 6, 20 or 40 bets, if in one line will line up three, four or five in a row respectively.

Minotaur is inhabitant of the legendary labyrinth. His appearance of three images will bring the player in 7 times more, four will bring 30 bets and five will bring 60 bets more, than you put.

Griffin is creature that combine heaven and earth in the Stash of the Titans. Is is rated at 8, 40 or 80 bets respectively.

Cyclops is one eyed giant, he is absolutely not dangerous here. Three of the same images will return you a tenfold bet, four will bring you 50 bets and five 150 times more than the bet.

Capitol is the image of the ancient Roman temple. It is estimated in this game 15, 60 or 250 bets, if these images will line up three, four or five in a row on the drum respectively.

Lerney Hydra. You will not need Heracles’ help to cope with it, even if you play in the Stash of the Titans slot machine for free. Its breathing is not poisonous. If three images will appear in the same line, your bet will be multiplied by 20, four by 80, and five by 300.

Treasure coffer. You have a chance to become the owner of a real mountain of treasures. Three images in a row will reward you in the amount of 30 bets, four images will return to you a hundredfold, what did you put in the beginning, and five images will increase the bet by 400 times.

A rider on Pegasus is a mythical winged horse. You are unlikely to meet him in real life, but if you see him here on the drums it will mean the increase of your bet by 35 times for three images in a row, 150 times for four images and 500 times for five.

Features of the slot Stash of the Titans

The symbols of the Coffer and the Rider may fall out mixed on the same line in the Stash of the Titans slot machine. In the case of such a mixed combination you will get 25, 90, 350 if three, four or five images make one line respectively.

Medusa Gorgona. You should not be afraid of her gaze here, because it’s just a scatter. The appearance of two in one row will double your bet, three will increase it fivefold, four images and the bet will return tenfold, and five and you will get 50 times more than the bet in the beginning. In addition three or more such images will launch 15 free spins with a fourfold multiplier.

Summing up all the above, one should hint that Stash of the Titans slot machine will first of all be appreciated by those fans of excitement, who at one time have read the Myths of ancient Greece. They will be pleased with the opportunity to see new book acquaintances in a new way. Nevertheless, even those, who hear about them for the first time, will not remain indifferent to this perfectly designed slot.