Supernova slot machine captivates with the mystery of the unknown space, where you get huge space bonuses. 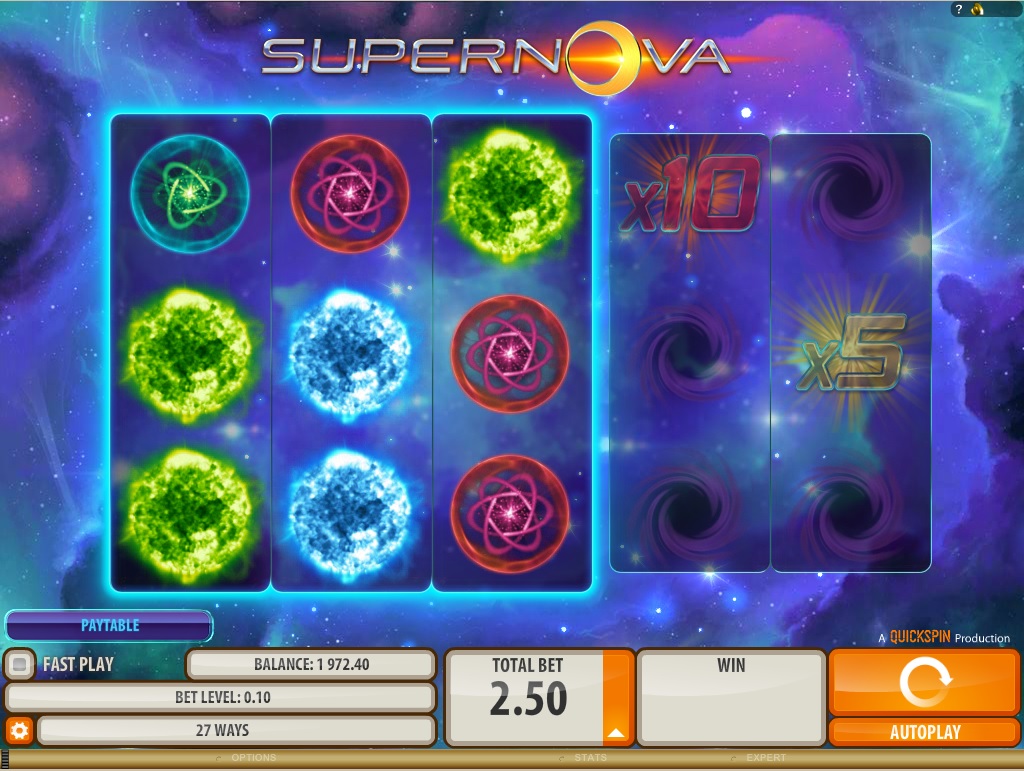 Cold stars, unexplored spaces, alien planets, there is something in outer space that continues to attract anyone who has imagination.

There are space exploration and flights to other galaxies. Isn’t that what each of us dreams about? Someone dreams about it consciously, but someone is afraid to admit this even to himself.

Probably, that’s why hundreds of books were written about the space, tens of thousands of films were shot and millions of computer games were created. But despite this, this theme remains exciting and almost inexhaustible and from time to time someone comes up with something completely new. Even if it’s simple online simulator of the Supernova gaming machine. It seems so only at first glance.

Thanks to the popularity of online slots, there are innumerable games. It seemed difficult to surprise in such a game, but the developers of the company Quickspin have become successful in this in full.

The slot machine Supernova looks so unusual and colorful that it can’t be confused with any other. Background fantastic music combined with a bright animation of the winnings, it literally bewitches and hypnotizes. Thanks to the frequency of winnings and the simplicity of the interface, the player wants to play for hours for money with the Supernova slot machine.

Slightly unusual kind of slot machine Supernova at first surprises, but it is impossible to get confused here. There are two playing fields, or, more precisely, two game drums. The first of them is a field 3 on 3. There are 27 winning lines on it. Combinations are considered from left to right, but the lines are practically irrelevant. It means that the symbols do not need to be on the same line, but they must always line up in each of the columns.

The second field is bonus. A bit more details you will find below.

The main games drum of the slot machine Supernova

Star with orbits – there are three kinds of such symbols in the Supernova slot, namely beige-pink, greenish and lilac. And although they differ not only in colors, but also in the number of orbits, payments for combinations of these images are the same – three times more. Notice please, all three symbols must be the same color. The different ones do not count.

Features of the Supernova slot

The bonus game drum starts to rotate only after the winning combination on the first drum. There are 2 drums, each drum can multiply your winnings according to the dropped multiplier. Note, that on the second drum only the image on the middle line is taken into account. The first or third line does not bring you anything. In this case, if wormhole fell in the first drum, the second does not rotate, and the multiplier is not taken into account.

The wormhole is a Black hole. When it appears on the first drum, it cancels the bonus multiplier, but does not cancel the winnings on the main drum.

Considering all the above, the Supernova slot machine definitely deserves close attention. There are fantastic animation, soundtrack corresponding to the entourage, considerable and frequent winnings.