Tomb Raider slot machine with delightful Lara Croft will teach you how to accurately and profitably plunder the tombs of ancient rulers. 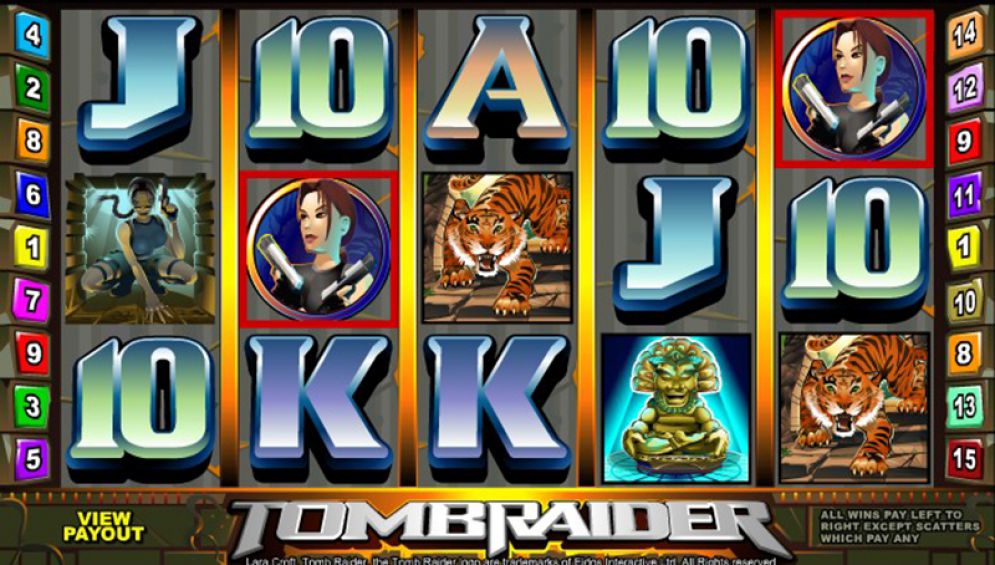 There are not many people who have never heard about Lara Croft. She is hero of many computer games, the first of which was released in 1996, has become a favorite among many players who are familiar with this series. Even those who have never played these games know perfectly who Lara Croft is. And it’s all because of the movie based on games, books, and comics about her. After its release, Lara’s name became known to almost everyone.

However, if you hear it for the first time, we are pleased to introduce Lara Croft, an archeologist and adventurer. Hardly anyone can calculate how many adventures she went through. The constant search for treasures and ancient artifacts doesn’t allow the brave girl to sit still. She is always ready to meet unknown dangers, this is her whole life.

The gaming machine from Microgaming tells us about these adventures. It seems that the developers are also so fond of the brave girl, that they’ve added two symbols with her image to the game. However, players only benefit from this, both literally and figuratively.

In addition, the game has some traditional “features”, which have long been the hallmark of this development team. Here, this “feature” is not absolutely original, but it perfectly fits into the general entourage and complements the storyline.

Playing the Tomb Raider slot machine resembles a trip to the cinema. Graphics of the slot is designed in the style of games from the famous series, as well as of the movie created on their basis. Without a doubt, all fans of this famous robber will really like it.

The Tomb Raider slot has from 1 to 15 pay lines. You can also adjust the bet size and the number of automatic spins. The game settings can be divided into two types: conventional and advanced. This is intended for those who like to experiment with various game features. There is no risk game in this slot. However, this cannot be called a failure, since there are enough winnings for everyone.

Features of the Tomb Raider slot

Tens ‑ these symbols will bring you double bet, if there are three of them, 15 bets you get for four and 75 for five in a row.

Jacks ‑ as in the case of Tens, a combination of three will double your bet, a set of four will increase it 15 times, and of five ‑ 75 times.

Kings ‑ the prize will be 5 times more than the bet, if there are three in a row, 50 times if four and 100 times, if you get a full set of five symbols.

Tomb Raider ‑ the first of two images of the main character is estimated at 20 bets for three, 100 for four, and 500 for five in a row.

Mysterious amulet ‑ can be considered as a symbol of luck, as it brings a fairly large win. You will get 50, 100, or 500 times more than you bet, if there are 3, 4, or 5 such symbols on the reels, respectively.

Lara Croft ‑ in this game, the famous adventurer is playing two roles at once. Here is the second one, the role of scatter, which brings prizes, appearing at any point on the reels. Two scatters will double your bet, three will multiply it by 4, four by 50, and five by 400. In addition, having got three or more scatters, you will also gain 10 free spins, during which all the winnings will be tripled.

The Tomb Raider logo is the wild symbol that replaces any other symbol except for the scatter. It can award you with winnings in the amount of 5, 200, 2000, or 7500 bets if there are two, three, four, or five wilds in a row, respectively.

Golden Idol ‑ combinations of three or more symbols launch a bonus game, where you need to select several figures, and each of them hides a certain prize. The number of figures that will be available to you depends on the number of bonus symbols appeared on the reels. For three figures, you will get the opportunity to win from 36 to 1500 credits, for four from 48 to 2000, and for five from 60 to 2500, so playing the Tomb Raider slot machine for real money is a very profitable business.

Like many other devices from Microgaming, the Tomb Raider slot machine also deserves the attention of those gambling enthusiasts who have never played video games from the original series and have never seen their screen version.

The Tomb Raider slot is decorated very colorful, and all those who want to get the most out of the game will appreciate the variety and flexibility of settings, up to the number of automatic spins.